Shin Godzilla is the latest reboot of an iconic character who has terrorized and terrified Japan (and parts of the USA) for many years since its debut in 1954. While this is an ambitious entry into the series and finds itself hitting a lot of the right notes, it ultimately stumbles across the finish line as it struggles to find a satisfactory and organic conclusion.

The movies start, as almost all Godzilla movies do, with a mysterious oceanic occurrence in Tokyo’s harbour that causes the top scientists and civil leaders of Japan to assemble. Before long, unsurprisingly, Godzilla shows up as a terrorizing infant causing considerable damage. These early scenes showcase what is perhaps Shin Godzilla’s greatest strength in that it is almost entirely told from the point of view of the people on the ground. As this initial attack unfolds, the POV shifts from the men (and women) in suits making the high up decisions to CCTV footage to handheld YouTube style videos to finally the eyewitnesses on the streets. Never do we get anything resembling Godzilla’s point of view, nor are we privy as to why he’s shown up or what his goal might be. In this way, Shin Godzilla is probably the first Godzilla movie since the original to actually treat Godzilla less as a character and more as just an unstoppable force of nature. Given the way several shots from these early scenes explicitly mimic and evoke the 2011 tsunami and nuclear disaster it is obvious that at least on some level Shin Godzilla is a meditation on that national tragedy.

When the movie solely focuses on the human tragedy, it is a great movie. The scenes of the evacuation of Tokyo as well as the moment Godzilla brings it crashing down look eerily more like accurate depictions of natural disasters than a monster movie. Military forces are rendered almost useless while civic leaders struggle to cope with trying to minimize human losses. And in a particularly Japanese twist, the most powerful scene might be that off a helpless Prime Minister refusing to evacuate because he feels an enormous sense of duty to protect the people he represents and is only convinced to leave when the local Tokyo officials remind him that it is his duty to survive for the rest of Japan. As much as the movie is focused on the mournful human tragedy side of things, it is also as concerned with honour and duty in the face of disaster. It in these moments that the movie truly feels like a worthy reboot of the original Godzilla movie as it becomes a metaphor for and a meditation on national tragedy

But alas, the filmmakers are not content to just stick with those themes. Instead the survivors of the attack busy themselves with a plan of how to defeat Godzilla using all the science at their disposal. Hanging over their heads is none other than the U S of A threatening a nuclear strike in two weeks to destroy the monster. The movie truly loses its way with this arbitrary ramp up to a happy ending and an unnecessary third act. The movie screeches to a halt as suddenly international political maneuvering and heavy science-speak dominate proceedings and it leads up to a finale that is quite laughable to say the least (although I won’t spoil it here).

The campy third act also forced me to then take notice of the other glaring weakness of the movie which is the horrible CGI. The ultra-realism of the ground POV loses a lot of its affect whenever the seemingly weightless and poorly detailed Godzilla makes the scene. It almost makes me wish they had just put a guy in a rubber suit all over again. Similarly explosions and water effects are poorly rendered and look like something out of a video game.

Despite these shortcomings however the movie still is a much more worthy instalment to the series than any of its American counterparts and this is possibly because the Japanese are much better at depicting the grief and mourning that are part and parcel of Godzilla’s arbitrary path of destruction. When it becomes a meditation on the role of duty in the face of immense grief and chaos it is an admirable movie. Unfortunately for Shin Godzilla, the filmmakers decided that on top of that they also needed an American-style optimistic story of overcoming the gargantuan beast through the power of the human spirit and ingenuity. And as the results show, these two paradigms really don’t mix well at all.

p.s. I do like how they managed to sneak the original Godzilla theme in though. 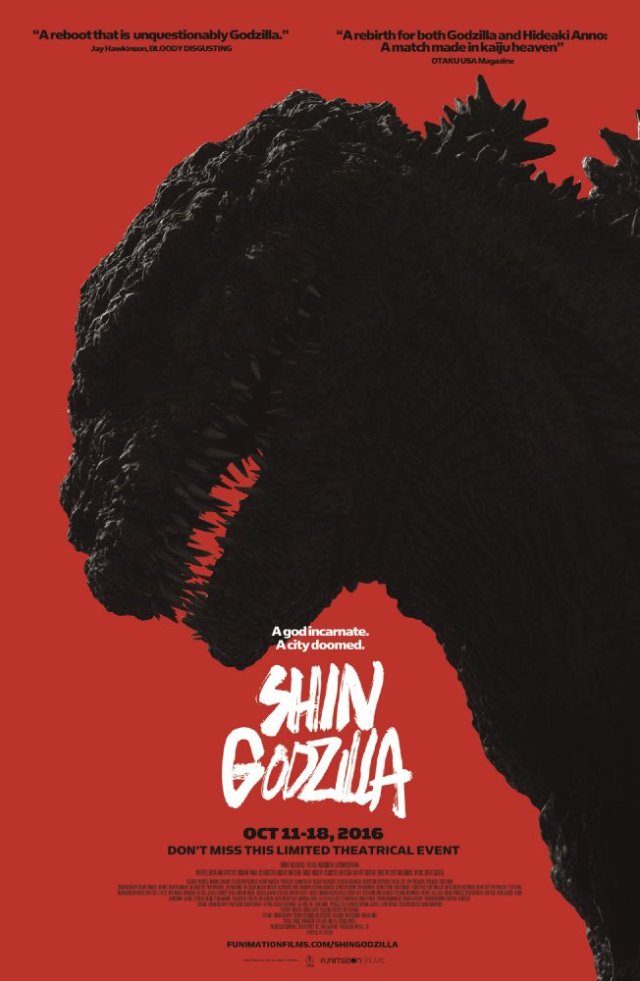