Since the last time we checked in there has been one huge change in my life with the arrival of my second child. While this change has produced typically chaotic results in my household, the chaos is a small price to pay for the absolute joy of being a father of two. And because correlating my current feelings with movies is just one of among the many weird things that I do, I figure the appropriate “Back From Hiatus” post has to be newborn related. And this being Friday, it means it has to be a “Best of” list.

The problem with this particular list is that the attitude Hollywood generally has when it comes to babies is of the cynical “kids are the worst” variety. Usually these movies come from the point of view of patriarchal men who seem to solely view children by the level in which they ruin what used to be an idyllic and tranquil childless past. Naturally, those movies are not the ones I seem to want to gravitate to when I’m holding my sleeping son in my arms as they tend to short-sell exactly how awesome having a kid is.

At least in my humble experience as a parent, having kids is awesome. Sure, I may be more tired than I used to be or have less time to myself. And it is entirely true that some individual days really feel long and draining. But as a whole, parenting is a blast. And so when I put together this list, I figured I might as well only include those movies that in some way capture that giddy, if thoroughly exhausted, feeling of being a parent and exclude all those whose starting point assumes children are a chore. Basically, this is a round-a-bout way of me saying that you are not going to find Three Men and a Baby, Look Who’s Talking, or a host of other frankly awful baby comedies from the 80s and 90s.

Instead I humbly propose this list of movies instead:

Babies pleasures are simple. It follows the lives of four babies in the first year of their birth, each of them in different cultural contexts. While the movie does try and reach for some overarching message against the over-scheduled parenting styles of urbanites, it is so much easier to just enjoy the proceedings from a surface level. The antics of the babies are universally pleasing, whether they are playing or crying, misbehaving or sleeping. And as new parents there’s just something instantly comforting about seeing other parents struggle with the awesome task of raising another child. While at the end of the day the movie is basically a glorified screen saver with adorable babies, chances are that is about all the stimulation required for sleep deprived parents out there.

Anyone who has known me for a long time knows that I am firmly on Team Batman in the eternal Batman vs. Superman debate (the comic book characters, not the horrible Zack Snyder movie). Superman is optimism personified, an eternal believer in the best of humanity, defender of the innocent, and an all-round decent guy. While these are usually the reasons I tend to rip on his character (jaded and cynical person that I am) they are the perfect characteristics for this phase of life. While I’m not so naive as to think my son could ever be like Superman and end all the world’s woes and make it an infinitely better place, the fact is that at this early juncture of my child’s life he theoretically could. The future is wide open as to what his life could be, and what better way to celebrate that than by hanging out with the superhero who is literally the best at everything he does (even if, I will still argue, that is what makes him ultimately a boring superhero, team Batman FTW). 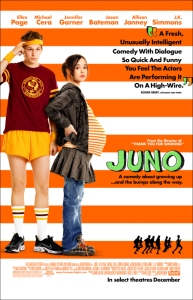 Juno was made during the height of the proliferation of “quirky” comedies in the mid-2000s. Yet unlike most of those throwaway comedies, Juno has stood the test of time for several reasons. First, underneath all that quirk is a warm grace that permeates this story of an unwanted teen pregnancy. It begins with all of its characters, whether it is Juno herself (Ellen Page) who despite her cocky bravado is desperately vulnerable or her parents who are more kind and generous than any parent in a teen movie has ever been before. Second, it is willing to be messy instead of trying to sermonize. We can see this in the fact that both pro-life and pro-choice advocates seemed to spend equal amounts of time praising and criticizing the movie for its stances, meaning that the screenwriters had managed to simply create a human story about one person’s experience without soapboxing. But finally, and most importantly, the movie is also succeeds in its basic task of being very funny.

It will never cease to amaze me that after a mere 24 hours or so trained doctors feel confident enough to hand newborn kids into the care of adults who, though well meaning, have little to no idea how to take care of a fragile child. And yet miraculously we parents muddle our way through and succeed in keeping these kids alive and in most cases thriving. No movie captures this frantic desperation of how to care for a newborn better than Satoshi Kon’s Christmas anime, Tokyo Godfathers which tells the story of three homeless people who stumble upon an abandoned newborn on Christmas Eve and decide to take care of this child as well as try and locate the actual parents. I frequently suggest this as an alternative movie for the Christmas season, because though it is dressed up very unconventionally Tokyo Godfather touches all the same themes of Christmas movies on the importance of love, family, forgiveness, and believing in miracles.

Proof that nature has as much drama as any screenplay, March of the Penguins is a compelling tale of love, death, hardship, and most importantly birth. Luc Jacquet and his team went through great hardship trying to capture a year in the life of emperor penguins in Antartica and unearthed not just the inherent beauty of their struggle but the surprising universality of it. As a bonus, baby penguins are an extremely close contender to human babies in terms of sheer cuteness. And while I usually would argue against watching a dubbed version of a movie, I will concede that the velvety voice of Morgan Freeman as the narrator is the perfect thing to listen to in these early days with my newborn and a perfect panacea to whatever tired or frazzled nerves I may have.

Admittedly this movie is a bit of a cheat as there are absolutely no newborns to be found in the story. But My Neighbor Totoro needs to be included simply because it has one of the best and most accurate depictions of children in a movie. Two sisters Satsuki and Mei move to and old house in the countryside to be closer to the hospital where their mother is being treated for a long-term disease. In the great tradition of Alice in Wonderland, the two girls eventually find themselves encountering strange and magical deities including the gentle and iconic Totoro. But the joys of the girls’ adventure is secondary to the sheer joy of seeing these two girls interacting with the world around them. The older my eldest daughter gets, the more I see the astute attention to detail Hayao Miyazaki and his crew paid when animating the movie because even in small actions the two sisters act like how my child would act. But besides being a preview of what’s to come from my newborn, My Neighbor Totoro makes it one this list for the overarching but gentle sense of wonder that it inspires not just in the magical but in simple and ordinary things. 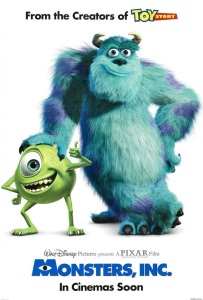 While Pixar’s Inside Out has a strong claim for being on this list, I ultimately decided that the buddy comedic duo of Sully and Mike Wazowki would have to be Pixar’s representatives this time around. And the reason for this has to do with the presence of the adorable infant Boo who somehow manages to sneak from the world of humans into the monster world wrecking havoc, chaos, and comedic gold wherever she goes. Besides being a wonderful allegory for the terror new parents face when a newborn is thrust upon them, it is also a kinetic and effortless screwball caper that remains for some reason severely underrated compared to its more illustrious contemporaries in the Pixar canon (although I will admit that peak Pixar was an impossibly excellent period of filmmaking). And this being a Pixar movie means that behind whatever comedic antics lies and warm and tender heart that is punctuated by the best ending in an animated movie ever. 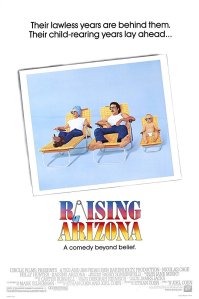 If there is one truism that applies for every “Best” list on this site, it’s that if a Coen Brothers movie even remotely qualifies for a list then it is almost certainly going to end up on that list. Raising Arizona is a rarity in that it is an out-and-out comedy where their oeuvre has tended to at incorporate at least some dramatic elements. Helen Hunt and Nicolas Cage star as a childless couple who, because of their desperate but futile attempt at having children of their own, decide to steal one of a rich moguls quintuplets for their own. This becomes the setup for a farce in which many Coen-type characters fill the screen with their ludicrousness and affectedness. And with Cage you know that you will at the very least get an interesting performance. But what cements this movie on the list is that unlike other Coen films, there actually is an unambiguously happy ending to the proceedings.

Dumbo earns its spot on the list on the basis of “Baby Mine” alone, the greatest song about motherhood ever committed to the silver screen as well as being the backdrop to one of the most touching scenes in Disney history. But besides that one scene, there will be many moments in Dumbo that will feel pleasantly familiar to new parents whether it is the stork’s arrival, Dumbo’s first bath, or the final reunification of Dumbo and his mother. Even the Pink Elephants scene is evocative of the sleep-deprived fugue many of us parents go through in these early months of child-rearing. While many Disney movies could be appropriate viewing at this time, none manage so well to capture the joys of a new child better than Dumbo. And at a breezy 64 minutes, it might be the only movie on this list that a new parent could realistically watch in-between feedings 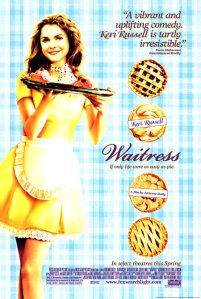 This movie has a strange power over me in that it fills me with warmth every time I think about it. It is a very small story about a waitress (Keri Russell) who finds herself pregnant with a baby she does not want with a husband she does not love. She uses her excellent skills at baking as therapy as she tries to extricate herself from her situation. It is the rare pregnancy movie in which a woman is allowed not to love her pregnancy and is allowed to genuinely freak out about the prospect of motherhood. And yet it still manages to be a warm-hearted and joyful celebration of life. And thus, it has all the ingredients for being the perfect movie to remind us on especially tiring and long days, that there is some joy to being a parent.