Within five minutes of Alice in Wonderland opening Alice has followed a frantic rabbit down a hole and fallen into a zany portal of sorts with floating household objects only to land in a room reminiscent of a set from The Cabinet of Dr. Caligari in which she encounters some biscuits that either shrink her to a mere fraction of her original size or cause her to grow to gargantuan proportions while she deals with a talking doorknob and upon escaping this room she finds joining a circle of seabirds and fish running around a campfire trying to dry off from the sea she dropped into. In other words, this movie is a lot.

Disney’s quest to get Lewis Carroll’s Alice in Wonderland onto the big-screen is a long and twisty one beginning all the way back in the 1920s. Back in the infancy of Walt Disney’s career he made a series of live-action shorts for the Laugh-O-Gram’s Films Cartoon Studios that were so successful they led to the eventual creation of Walt Disney Studios. When Disney wanted to move into feature length films, Alice in Wonderland was originally slated to be the studio’s first film but a disastrous adaptation by rival Paramount in 1931 shelved that idea as Walt felt there needed to be some distance between Paramount’s panned adaptation and his own. After World War II delayed his plans further the movie was finally green-lit for production but immediately ran into script problems as the inherent problems with trying to adapt Carroll’s work became immediately apparent as an initial draft by Brave New World author Aldous Huxley was rejected and eventually 13 different writers had to be called in to complete the script. Usually such a long and disjointed developmental process would indicate a doomed movie but in this case the messy process of getting the film made serendipitously turned out to be the perfect method for adapting Carroll’s work.

The plot of the movie, if one can call it a plot, is that Alice one day spots a White Rabbit in a waistcoat, finds that a weird occurrence, and then spends almost the entire runtime of the movie trying to catch up with the Rabbit in question. What follows, as I hinted in my opening, is a series of increasingly absurd situations and characters for Alice to encounter in an ever-increasingly surreal adaptation of Carroll’s work. Though this has the odd effect of rendering Alice herself as a rather bland character, this hardly matters because for most of the movie I found myself enthralled by whatever absurdist concept was currently being thrown at me.

This is a movie of Unbirthday Parties, disappearing Cats, snooty singing flowers, and Caterpillar educators. Each character follows the other with no particular rhyme or reason and disappears just as abrubtly as they came. This is a movie where one of its longest sections is a retelling of the nonsense poem “The Walrus and the Carpenter” that features some of the most macabre storytelling Disney has ever put out, but has nothing more than peripheral import to the larger plot since it functions mostly as a way for Tweedledee and Tweedledum to keep Alice from the White Rabbit just a little bit longer. In the novel, these absurdist elements were meant to be a veiled and charming critique of the absurdities of Victorian culture and perhaps it is regrettable that Disney’s version seems to be zany without a similar purpose. Yet taken on its own terms, Alice in Wonderland remains an entertaining and breathless assault on the senses.

The side characters barely get more than a scene to leave an impression on the viewer and just about each one of them does that by sheer force of will. The cultural imprint of the Mad Hatter, March Hare, Cheshire Cat, the Tweedle twins, the White Rabbit, the Caterpillar, and the Queen of Hearts belies their actual onscreen time in this movie. This is probably because it the movie’s five directors engaged in a brutal competition of one-upmanship resulting in some creatively imaginative characters set in increasingly psychedelic locations. The movie is an animation riot in which absolutely nothing is done in half-measures. None of it makes any much sense but this is also what makes the movie so captivating.

Adding to this movie’s wonderful disorientation is the art direction of Mary Blair. Blair, perhaps most famous for her distinctive design of the ride “It’s a Small World”, gave Alice in Wonderland the an impressionistic and surrealistic look, with nary a straight line or right angle to be found while filling the screen with bold and unnatural colours. Clearly it was the way the entire production took its cue from Blair’s sketches and conceptual art that pushed the movie towards its eventual status as a stoner film during its 1970s revival. It also makes the movie the most visually interesting Disney movie to date.

Alice in Wonderland is also surprisingly the most musical Disney movie. It features 18 different songs with some songs barely lasting half-a-minute while other songs take up whole scenes. The movie relies heavily on the music and singing to carry the story along and transition the scenes resulting in a movie that is very rarely quiet. The music also helps keep out increasing disorientation at bay as the movie gets more and more detached from reality the further in we get.

The movie’s efforts to unhinge is from reality are so successful that the moment when Alice finally catches up to the White Rabbit and the movie veers to its third-act conclusion it comes as a slight disappointment. This is because the sudden adherence to resolving Alice’s plight jarringly reminds us that the least interesting part of her journey inWonderland is Alice herself. For the seemingly wild child she is set out to be at the offset, she turns out to be surprisingly one-note and bland in Wonderland, oscillating between astonished and politely perturbed. While this undoubtedly let her supporting characters shine it does mean that the final third that is primarily concerned with extricating her from Wonderland is slightly less entertaining than the absurd adventures that came before.

It should come as no surprise that the movie was initially panned when it came out. It excised most of the complex commentary from Carroll’s original book in favour of pratfalls and antics. Walt Disney rolled out the “we made this for fans, not literary critics” excuse (possibly the earliest use of that particular excuse) and then watched as the audiences also gave the movie a lukewarm reception. Audiences didn’t get it and how could they? There was hardly any precedence for a mainstream film to throw so much nonsense onto the screen in so quick a time. Fortunately the intervening years has been kind to this movie. The advent of psychedelic movies like Yellow Submarine in the late 60s proved to be a boon to previously misunderstood Disney classics like Alice in Wonderland and Fantasia. Alice‘s reemergence as a stoner flick also led to a critical reevaluation and renewed mainstream popularity where it can now be clearly seen for the revolutionary piece of filmmaking it is.

Alice in Wonderland is a puzzling and unique film. It is flawed in that its central protagonist is uninteresting and the plot is nothing more than a literal rabbit chase stringing together several disconnected vignettes. Yet it is precisely the flaws that make the movie interesting. The surreal imagery and disjointed plot create the only Disney movie to dabble in literary nonsense. And it seems that this freedom from telling a story gave the animators free rein to push their art to the limits, creating some of the best animated sequences in Disney’s canon. Just about all the supporting characters leave a lasting impression with each seemingly trying to outdo the other in getting our attention. Every revisit of this film fails to illuminate any deeper meaning to the story its trying to tell, but it is also rarely not captivating in the moment. 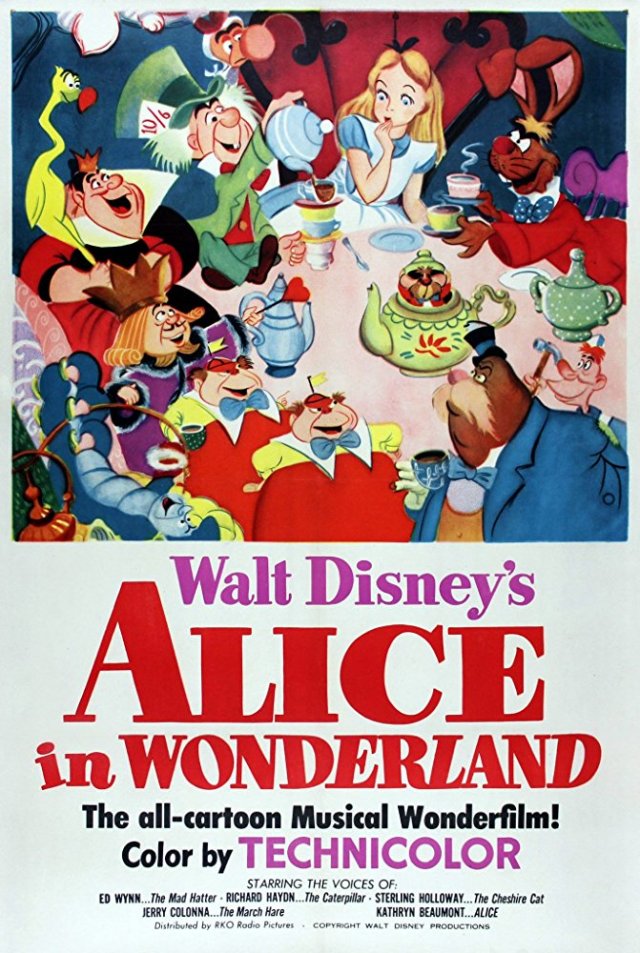