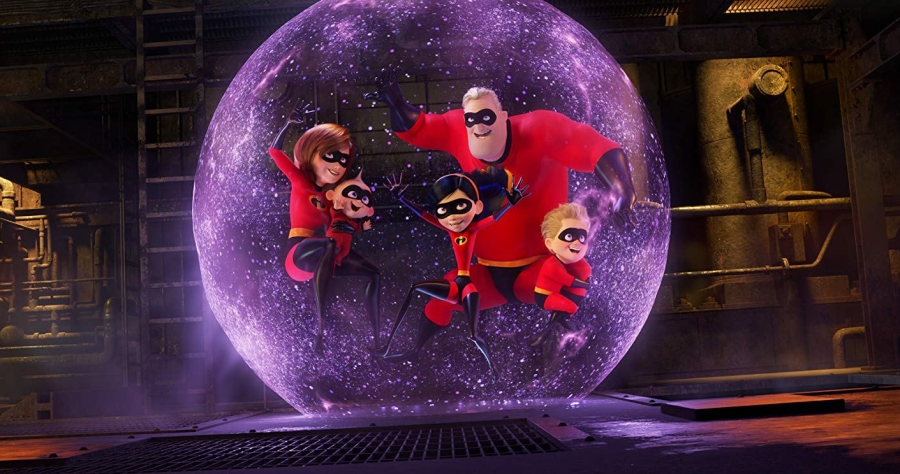 With the opening of Incredibles 2 picking-up immediately after the events of the original movie – which came out in 2005 – it provides a unique vista point for us to see just how far, and far away, Pixar have come from the heady days of their golden age of the first decade of the 21st century.

Wasting absolutely no time in plunging us into the action, the movie quickly gets us reacquainted with the Parr family featuring Bob a.k.a Mr. Incredible (Craig T. Nelson), Helen a.k.a Elastigirl (Holly Hunter), and their three children Violet (Sarah Vowell), Dash (Huck Milner), and Jack Jack as the try and stop the nefarious Underminer. This sequence, which is reminiscent to the final battle in The Incredibles, provides us a showcase of how much animation has progressed in the last decade or so. As the Incredible family moves frantically to save the city, the level of detail, dynamic movement, and believable physics in this sequence is leaps and bounds beyond the original Incredibles. And this is something that will be true throughout the sequel. Just about every action sequence present is a highlight in this movie; a clear sign that the animators have many more tools at their disposal today and have used them with full aplomb.

This opening battle ends predictably with the Incredibles and Frozone (Samuel L. Jackson) saving the day. Less predictably, it also leads to their arrest as it is revealed that their heroic exploits in the original movie have not in fact caused a huge policy reversal on the ban of superheroes. Seeking to change that is the brother-sister duo of Winston (Bob Odenkirk) and Evelyn (Catherine Keener) Deavor – two wealthy socialites who want to bring back the “supers” into public life again. And in a stunning twist (if you haven’t seen the multitude of trailers that is), they decide that it is Elastigirl who represents their best bet of changing public perception, saddling Bob with the duty of taking care of the kids while his wife gets to shine.

This development turns out to have mixed results for the movie’s direction. On the one hand it is truly thrilling to see Elastigirl, who spent most of the first movie sidelined with parent duty, now take centre stage. Her eventual cat-and-mouse tussle with a new uber-villain called the Screenslaver, who controls his subjects through screens, produces some of the best action scenes of the franchis since her powers are infinitely more visually interesting than Mr. Incredible’s pure brawn. She is powerful, proactive, intelligent, and strong and it is a delight that this movie gives her the spotlight to shine.

However Elastigirl taking centre stage does come at a cost to the rest of the Incredible clan. While Bob now being tasked with taking care of the kids does provide an easy well of comedy, it also reveals just how much Helen was been very much the heart and soul of the Incredible family and without her being there for most of the movie, the family just fails to click. Also as a stay-at-home father myself, it was a little bit annoying to see Bob play just about every stereotype of a clueless Alpha-male dad with about as much nuance as a 1990s sitcom.

Bob’s domestic developments also highlight another weakness of the movie when compared to the original. The original movie was a surprisingly complex movie that dealt with, among other things, the subjugation of past personal and solo glory for the less glamorous but equally promising work of parenting that was dressed up as a superhero movie. In Incredibles 2 however, whatever larger themes of feminism, vigilante heroism, or the reality of professional jealousy in the context of a marriage mostly gets swept aside to tell a fairly conventional spy action-thriller tale. The end result is a pretty good action-thriller that is fairly shallow. Elastigirl’s tangle with the Screenslaver is ultimately your run-of-the-mill villainous plot development that contains none of the complexity that the original battle with Syndrome had.

And as always, Incredibles 2 highlights a systemic problem Pixar has with every one of its sequels (including the excellent Toy Story sequels). Pixar’s strength has always been in taking high-concept ideas (a robot love story; a house that floats; a monster workplace drama, the inner workings of the mind etc.) and surprising us with their creative twists in bringing that story to life. Part of the joy of watching a new Pixar movie then is in seeing exactly what new and unexpected place the studio will take us to. It is the genuine surprise of their storytelling and the wonder it inspires that has made Pixar so successful. However in the case of Incredibles 2, there is no expectant surprise in how Pixar will tell their story. We know what a Pixar superhero story looks like. Instead whatever shock and surprise in the story is strictly reserved to plot twists as the movie reverts mostly to the formula established by the original movie, making it feel just a little less special.

Of course, this is a very high bar to live up to. Pixar in the last decade have been victims of their enormous critical and commercial success of their golden age in the 2000s and it is perhaps unreasonable to keep comparing their current output to that impossibly excellent age. On its own terms Incredibles 2 is a pretty decent superhero action movie in a franchise that admittedly is the most sequel-ready in Pixar’s stable. It is entertaining and rewatchable in a way that will not drive me insane when my daughter inevitably wants to see it again on TV. It’s tangential messages of female empowerment and the importance of both parents being involved in child-rearing are doubtlessly encouraging and well worth uplifting. This is a good movie. Unfortunately it never becomes anything more than that.