The third movie of a trilogy is always a tricky act. With the first film you get to introduce a brand new idea and a brand new world to an audience. Do that job right and you get to produce your sequel in which you expand the world, deepen the storytelling, grow your characters, and, if you do it right, throw a twist to the tale that sets it up perfectly for the third (and possibly) final picture. But the third act is about sticking the landing. Where the first two films deal with an expansion of the fictional world, the third deals with closure and endings. It is a thankless task and tricky task. If you go too big and try to top everything that has gone on before, you risk testing the limits of believability for the franchise. If on the other hand you play it safe and stick to the formula that has worked before, people accuse you of phoning it in. It is a thin line to success and many a potentially great franchise has been brought down by the failure to walk that line.

With the rebooted Planet of the Apes franchise, there is the added wrinkle that as a loose prequel to the original 1968 series there are dots that need to be connected – but they need to be connected in ways that genuinely surprise and shock and not in ways that people can see coming a mile away. All this to say that the task facing director Matt Reeves with War for the Planet of the Apes was a daunting one. Fortunately for the most part he manages to stick the landing if a little inelegantly.

The story picks up pretty much immediately after the events of Dawn of the Planet of the Apes where Caesar (excellently portrayed again by Andy Serkis), having regained control of the ape tribe again now finds himself in conflict with the remnants of the US army. The beginning of the movie suggests that it will live up to its title in a very conventional way as human troops descend upon an unsuspecting ape outpost. After this initial skirmish is fought back by Caesar and his troops however, the movie shifts tones and suggests that this “war for the apes” is as much an internal struggle in Caesar’s heart as it is an external conflict.

The movie is surprisingly personal and intimate, as it very rarely descends into a CGI and explosion filled affair. When the human Colonel (Woody Harrelson) sneaks a strike force into the ape camp and inflicts horrific casualties, Caesar decides to go on a personal war path of revenge against the colonel, separating himself from the rest of the tribe. This allows a good chunk of the movie to be a meditation on the validity of revenge and the (excuse the pun) de-humanizing effect it has on those who seek it.  Caesar is followed by his small group of faithful friends (Maurice the orangutan, Luca the gorilla, and Rocket the chimp) who each act as foils to Caesar and his goals. We all know Caesar’s necessary path will eventually lead him face-to-face with the Colonel but the way in which he gets there and what happens when he does get there is both interesting and subversive as the movie carefully suggests that our normal human desire for redemptive violence may be illusory and ill-placed.

Of course it should come as no surprise that the movie is subversive. From the very outset of Rise of the Planet of the Apes the series has had us increasingly and naturally aligning with the survival of the apes over and against our own survival as a species. I’m reminded of a sentiment expressed by Yuval Noah Harari in his excellent book Sapiens that it is only when we tell the story of history from the perspective of humans that we can talk of ourselves being the heroes of the story. From every other creature’s perspective, we are most definitely the enemy. This through line definitely becomes clearer as the series has gone on, where increasingly fewer and fewer humans are sympathetic as their demise becomes more imminent. In addition, the series continually asks the question if Caesar’s rise in intelligence and “human” capabilities truly makes him and the people around him better. It is the series’ insistence of not running away from these complicated questions that have always elevated it beyond its source material and War is no different.

The series has also always been an excellent technical achievement because in order for these movie to work, the apes have to look and act and behave in believable ways. And in this respect, War is an appropriate pinnacle of those achievements. Caesar and his companions are rendered beautifully, and more importantly they have so much detail to them that they are able to convey emotion, thought, and depth of character simply by their eyes. The movie frequently does close-ups of these apes, almost daring us to find fault in the animation. And every time I found none.

Of course one of the problems the series has frequently encountered is that the care and devotion that is given to creating believable and multi-dimensional ape characters does not usually extend to the humans involved. And the great misstep of War is that it is the worst offender in this regard. The Colonel is simply a cartoon villain, with little nuance and existing mostly to provide the source of conflict in the plot. Though Harrelson does a commendable job chewing the scenery with what he has been given, but he cannot escape the one-dimensionality of his character. And that is to say nothing about the rest of the humans, who could be cardboard cut-outs for all the depth of character they show. It is ironic that the most rounded human in this movie is a little mute girl who has to communicate exactly like the non-Caesar apes. Once again it is the humans that are the weakest part of the movie and the movie makes it a little too easy to root for our simian brethren instead.

That should not detract too much however from the general excellence of this movie and the series in general. From the moment Rise showed up in 2011, the series has been a surprising and smart piece of counter-programming to the usual summer fare. And gladly War for the Planet of the Apes concludes this series with appropriate and subversive aplomb by suggesting ultimately that true humanity has less to do with our species and more to do with goodness and decency within. 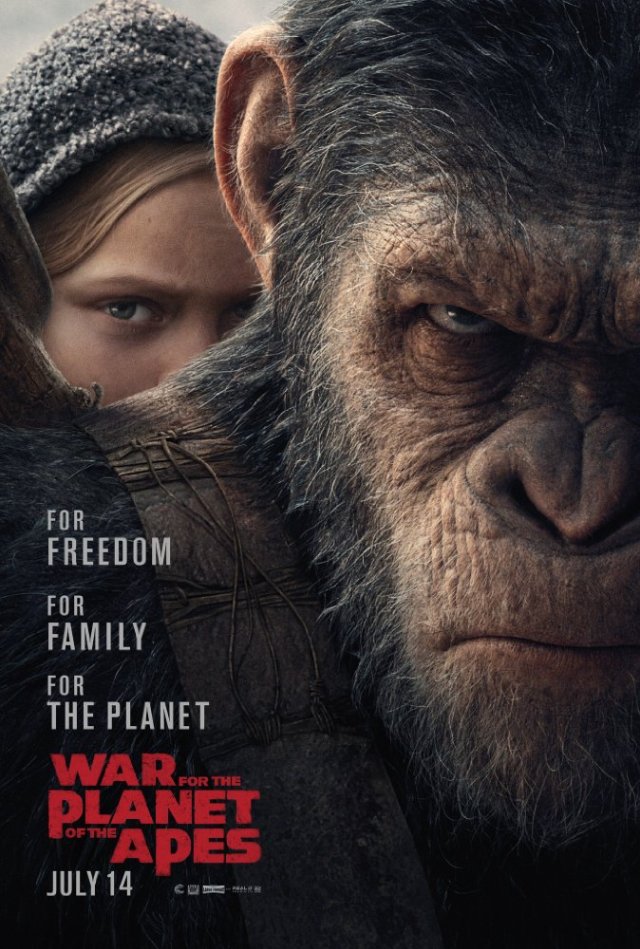 One thought on “Big Screen: War for the Planet of the Apes”