As I write this, it is currently -7°C with a -17 wind chill out my window which is ironically some of the warmest winter weather we’ve had recently. Meanwhile a brief check on my Timehop app reveals that two years ago I was basking in the warmth of the Maui sun, my phone incessantly mocking me as I reach for a second blanket to keep me warm.

Now some people might be tempted to give me the advice of thinking warm thoughts, changing my desktop wallpaper to something tropical, and most importantly to maybe watch some great summer themed movies to take my mind off the ice forming on the inside of my sliding door. But those people are wrong. You see, this boy who was born in the tropics has learnt that the best way to combat the winter blues is not to trick myself with the illusion of warmth. Instead the best cure is to stare into winter’s cold, dark abyss and make it blink first. So in order to steel oneself for that task, I present the best winter-themed movies below:

Doctor Zhivago – There are many worse ways to idle the time than by spending three hours or so with David Lean and a Russian winter.

Frozen River – This naturalistic portrait of poverty in America is this list’s recipient of the “So close to the Top 10 but not quite” award.

The Grey – Liam Neeson takes on wolves. What more could you ask for?

The Hateful Eight – Nothing like eight truly horrible people doing horrible things to one another while being cooped up in a winter storm to make you feel slightly better about your own situation.

March of the Penguins – If we must watch cute animals to distract us from the cruel cold we must at least have those animals live in darkness and subzero temperatures most of the year.

Misery – Kathy Bates best role, but a strong supporting nod needs to go to the treacherous snow-packed terrain that makes it so perilously difficult for James Caan to get away.

The Revenant – Leonardo Di Carprio stars in a PSA about why going outdoors is the absolute worst.

A Simple Plan – Easily the second best crime movie set in Minnesota during the cold, dark months of winter.

Snowpiercer – A dystopic future in which the only human survivors are on a class-stratified hyper-speed train that circumnavigates the earth. And they need to be on this train because the entire world is permanently covered in deadly winter.

Wind River – Nothing like a hard-boiled neo-noir set in the treacherously cold mountains of Wyoming. 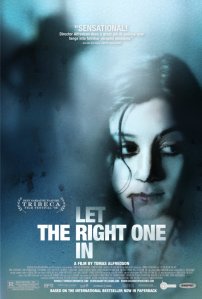 This is an atmospheric and austere chiller of a vampire flick, set in the urban forest of apartments in the suburb of Stockholm where a Oskar, a frequently bullied 12-year old boy, slowly begins to suspect that his new neighbour Eli might in fact be a vampire. The snow covered terrain and eerily quiet night streets of Stockholm turn this movie less into a scream-fest and more into a methodical meditation on isolation, loneliness, and the violent cruelty that can bubble up in people as a result of both (although make no mistake, there are still scares and gore aplenty to be found).

There are few more appropriate locales for a winter movie than Canada, and if you are going to set a winter movie in Canada the ideal city to set it in is clearly Winnipeg. Guy Maddin’s part-documentary part-surrealistic-dream is the perfect showcase not just of the unique place that is Winnipeg but also of the the love-hate relationship that all Canadians seem to have of the long, cold winters. It is a movie that best approximates the fuzzy sleepwalking haze that we in Canada seem to carry ourselves in the early months of the year, and is thus weirdly enough a comforting reminder of our shared eternal embrace and conflict with this season of snow.

Yes, this film about the Klondike gold rush features one of the most iconic scenes in all of cinema with the bread roll dance. And Chaplin’s legacy is one of highly choreographed comedic pratfalls. But what the casual viewer may not realize is that Charlie Chaplin is also just a fantastic storyteller and The Gold Rush is one of his best. It is a story dripping with humour, romance, and pathos as Chaplin in his Tramp persona plays a hard-on-his-luck gold prospector who traverses the Klondike in a desperate search for his fortune. And standing in his way is not just other prospectors but the constant blizzards and avalanches that imperil his way.

To call this movie bleak is an understatement. Set in the frozen wilderness of Antartica it tells the story of an expedition group that encounters a shape-shifting alien with nefarious ambitions. The already existent cabin fever amongst the marooned crew boils over into outright paranoia and violence as they are slowly picked off one-by-one by an enemy who in all likelihood is disguised as one of them. And as I wrote in my full review, there is probably nothing more appropriate to watch right now then the story of a bunch of men who distrust one another to the point of mutual destruction, all framed by the brutally unforgiving Antarctic terrain. 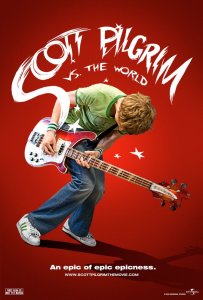 This Toronto-based movie about the immature boy Scott Pilgrim (Michael Cena) and his seven battles against the evil exes of his current girlfriend Ramona Flowers (Mary Elizabeth Winstead) is an entertaining comic-book fantasy in many ways, but there is one way in which it is startlingly accurate. The entire movie is set in about six feet of snow, with more snow falling frequently throughout the movie and yet all the characters barely acknowledge the snow. Instead they engage in epic battles, play in epic rock shows, and in one case engage in an epic rock battle, with nary a mention of the snow’s existence or even the slightest hint that the snow might be even a minor inconvenience. Life goes on, and no snow is going to stop us. And this is, in the most accurate essence, the Canadian way.

No list about the dark cold of winter would be complete without an Ingmar Bergman film, and no Ingmar Bergman film is more appropriate for this list than Winter Light as it deals with the existential crisis of a rural pastor. The movie follows Tomas as he goes on his round of Sunday services, trying his best to go through the motions of the services while dealing with the shadow of suffering, evil, nuclear war, and the deafening silence of God in the midst of it. Winter Light is one of the best depictions of the tenuous relationship between doubt and faith, especially as it concerns the people who are tasked with having the most certainty about faith. In other words, it is right up Bergman’s alley and is the perfect movie for the bleak midwinter.

Ultimately is there a more appropriate analogy for the feeling of post-Christmas winter than that of Bill Murray’s newsanchor Phil waking up time and time again to the same day only for a groundhog (coincidentally also named Phil) to tell you that there’s going to be six more weeks of winter? But besides that analogy, the movie is also the most comedic extrapolation of existentialism ever put to film and this is entirely thanks to Bill Murray’s detached-melancholy brand of comedy that turns what might be a silly concept for a film into something altogether more profound as he struggles to find meaning in a reality where he has to repeat the same 24 hours day-after-day for seeming perpetuity.

Wes Anderson’s most hyper-stylized feature yet is the perfect fairy-tale storybook in that it is equal parts enchanting as it is also sometimes shockingly violent ala the brothers Grimm. With Anderson’s typical attention to detail this movie is a masterclass in meticulous design and is set against a winter backdrop chronicling the travails of a lobby boy (Tony Revolori) and his adventures with the Grand Budapest Hotel’s head concierge, the enigmatic Monsieur Gustave H (a fantastic Ralph Fiennes) as they try to claim the inheritance of Gustave’s former love while trying to evade the vengeful family seeking to claim it for their own. It is subtly Anderson’s funniest film and his most thoughtful, all wrapped up in his typically gorgeous design. 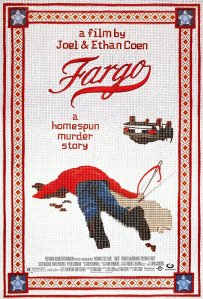 This movie’s great cultural legacy is in introducing “Yah, you betcha” into the public consciousness but that short-sells the general excellence of this quirky and darkly comic crime movie. It is a throwback screwball comedy disguised as a murderous tale of greed, treachery, and hubris. Marge Gunderson, the pregnant and no-nonsense-taking police chief, is easily one of the best to have ever donned the badge on film. And frigid Minnesota provides the perfect setting for this tale of external niceties hiding much darker instincts. In short, the perfect kind of Coen brothers movie.

The true genius of Kubrick’s interpretation of The Shining (with all respect to Stephen King) is his decision to blur the lines of what ultimately torments Jack Torrance; whether it is the ghosts that haunt the place or it is happening entirely in his head. The Overlook Hotel is the perfect setting for the movie, a cavernous hotel with endless halls to roam that still feels claustrophobic because of the dozens of feet of snow that keeps piling up against its walls, trapping the winter caretakers inside. The climax of the movie in the snow-covered maze alone is enough to earn this movie its spot on the list. But it is its depiction of cabin fever taken to its extreme and (probable) logical end that vaults this movie into the top spot as the Best Winter Film of all time.

One thought on “Best Winter Movies”