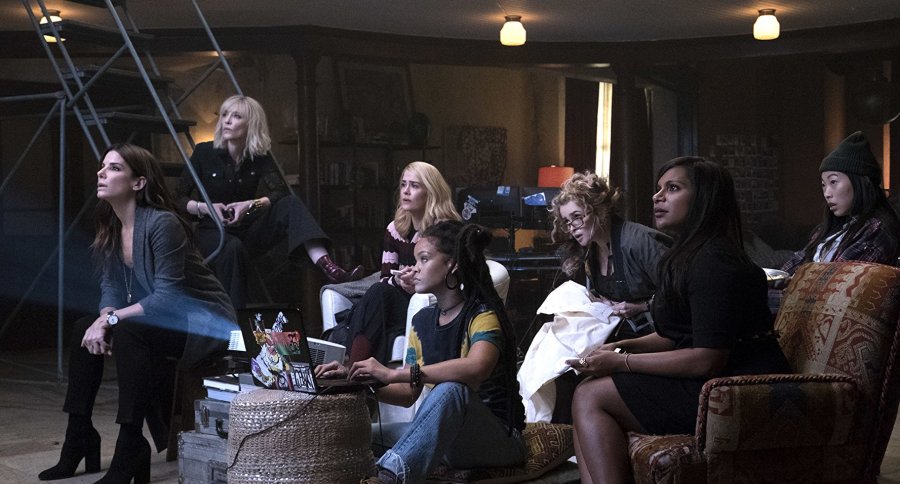 As I was about to step out the door to go catch my first double feature since child #2 came along, my wife scoffed at my film choices since she has heard me mock both of the titles repeatedly for various reasons. She asked, “Are you so desperate to get your solo-movie fix that you’re going to catch movies you know you probably won’t like?” Of course, she knows that question is entirely rhetorical. 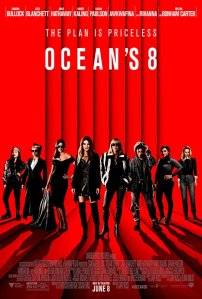 I will admit that when news of an all-female remake of Steven Soderbergh’s Ocean’s Eleven broke, I rolled my eyes. Not because I was opposed to all-female heist movies, but because the whole enterprise reeked of a corporate-inspired cheap money grab designed to ring every last dollar out of an intellectual property. And while the final product does not rid itself completely of the corporate-mandated stink that inspired its birth, Ocean’s 8 is in fact much better than it has any right to be.

Almost all of this is due to the exemplary cast that has been assembled. At the centre is Sandra Bullock playing Debbie Ocean, the incarcerated sister of the recently deceased (?) Danny Ocean, who is released early on parole on good behaviour. Like her felonious brother, it quickly becomes obvious that she has less-than-altruistic intentions in mind as she seeks to carry out the heist she has planned during her time in prison. Much like her brother Debbie is confident, brash, and clear leadership material but there is an underlying desperateness, and thus resourcefulness, to her character that makes her more than a Danny Ocean clone. She seems to intricately know that this world treats women differently than men, and in that difference lies the opportunity to exploit it for her gain.

Her assemblage of an all-female crew is succinctly and believably explained (“A him gets noticed, a her gets ignored”) and joining her first is Lou (Cate Blanchett) who ably fills the Brad Pitt role in this new crew. While it is slightly disappointing that Blanchett is stuck doing her best Pitt impression rather than creating a unique character of her own, it is also yet another moment for us to appreciate the chameleonic abilities of Blanchett as she arguably plays Pitt better than he does himself.

With her captain in tow, Debbie assembles the requisite motley crew including a failing fashion designer (Helena Bonham Carter), a jewelry-forger (Mindy Kaling), a pickpocket (Awkwafina), a hacker (Rihanna), and a gadget-girl (Sarah Paulson). As befitting any Ocean’s movie the heist is suitably overly complicated and twisty. In its simplest form it involves stealing a $150 million jewel necklace by persuading the unwitting patsy and famous actress Daphne Kluger (Anne Hathaway) to wear it for the upcoming Met Ball where it will be presumably be stolen somehow. Most of the joy in this movie is seeing exactly how this will be done.

Hathaway arguably almost steals the movie with her performance here. I’ve never quite understood the social media hate surrounding her, but it seems clear that Hathaway understands that perceived persona intimately as she expertly portrays a narcissistic and entitled actress, as much succeeding on the vapid public expectations of female celebrity as being a victim of it.

As you might surmise from the plot, the movie hews closely to Soderbergh’s original and this is intentional. It falls under the new emerging category of “requel” movies (part remake, part sequel). And as such suffers the same curse of all requels, namely that they simultaneously want to be something new but are so beholden to the original that it ends up becoming neither. The all-female aspect of the heist crew is only slightly mentioned in the narrative as the movie punts on making any real statement on being a female heist film. Meanwhile the movie follows the beats of the original so closely that it begs to be compared to Ocean’s Eleven. And when we do make the comparison the differences become glaringly obvious.

The original Ocean’s Eleven is a minor miracle in that it took a ridiculous amount of relatively big stars (some of them mega-stars), placed them in a complicated heist film, and watched as it effortlessly unfolded as one of the breeziest movies of all time. A lot of this had to do with the underrated direction of Steven Soderbergh, but a lot of it had to do with the lightning-in-a-bottle alchemy that is as undefinable as it is unrepeatable. We know this because the direct Ocean’s sequels, featuring the same cast and director, couldn’t replicate its success.

While Ocean’s 8 comes close to mimicking the original in places, and is probably the best sequel, it still doesn’t quite measure up. The problem has little to do with the ladies, but with the male director Gary Ross whose workmanlike approach to the filmmaking and editing here frequently keeps the movie out of sync as it gets going in fits and starts. Fortunately for us the heist itself moves in an effortless rhythm but the direction before and after is perfunctory at best and jarring at worst. For what it is though, Ocean’s 8 is still a pretty good heist film that is far better than it had any right to be thanks to some truly amazing ladies. 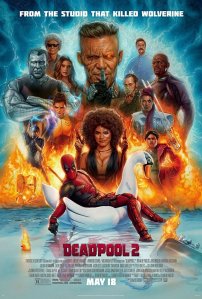 I remember the first time I stumbled upon Family Guy when I was still in high school (being in Malaysia, I came to the Family Guy-party a little late). I remember being shocked by the humour and, as a result, laughing until my sides hurt. The brand of humour seemed so biting and iconoclastic compared to the more genteel The Simpsons that at the time was my go-to animated sitcom. However somewhere around the tenth season, it became clear that the shock humour Family Guy peddles in had lost its edge and gotten predictable, becoming increasingly eye-rolling with each successive season.

I bring this is up because this is exactly the same dilemma facing Deadpool 2. When the original Deadpool was released it sent shockwaves through the industry by successfully lampooning just about everything in the superhero genre while – an almost literal exercise in biting-the-hands-that-feed-them. As the first R-rated superhero movie, it took full advantage by shoving every bit of crass humour, sex, and violence that they could into the movie. It was a breath of fresh air into a genre that was increasingly becoming formulaic and stale. That however, was two years ago. In the intervening years we’ve seen the release of a superhero movie that truly earned its “R” rating for its mature, rather than Deadpool’s juvenile, themes in Logan. Meanwhile the MCU, the big target of Deadpool’s snark, has embraced also embraced self-parody to a lesser degree in Thor: Ragnarok. The only studio to not really pay any attention the the lessons Deadpool taught us was Warner Bros. with the DC cinematic universe which, as we have seen, were lessons Warner Bros. ignored at their own peril.

With the original Deadpool adding so much to the superhero genre, the question now is what, if anything, Deadpool 2 can bring to the table. The answer, regrettably, is not much. Instead Deadpool 2 falls into the classic trap of most comedy sequels in trying to recreate the  magic of the original, but simply by providing us with more of the same. By the time the opening credits roll (an admittedly amazing homage to James Bond opening credits featuring Celine Dion) we find ourselves already treated to a slew of fourth-wall breaking, superhero deconstructionist violence – but without the added bonus of never having seen this before. Ryan Reynolds’ Deadpool is as foul-mouthed and glib as ever, but your own personal mileage will vary on how long before his schtick becomes old and exhausting (mine happened somewhere around the end of the first Deadpool). The problem with shock humour is that it has to, by definition, be shocking and unexpected. Deadpool 2 ultimately falls flat because we are no longer surprised by what we might see – the series becoming predictable in its manic unpredictability.

With the iconic humour of the original movie falling flat, it falls on the other elements of the movie to help the movie along. Fortunately there are many respects in which this movie does improve on the original, making it ultimately a serviceable sequel. The major difference, and most important, is that the folks making this must have realized that Wade Wilson’s glibness would wear thin on his own and so they surround him with a host of new characters to balance him out. Most prominently, the movie adds Cable (Josh Brolin), a straight-talking no-nonsense man of the future who has come to our time in order to preemptively kill off a future homicidal maniac (or, the exact plot of Looper). Brolin’s deadpan gruffness proves to be the perfect foil for Deadpool’s hyperactive glibness while his mission adds some real stakes to the proceedings, forcing Deadpool to be more than just a mere quip-machine (although he still remains that).

The future homicidal maniac in question is a troubled teenage mutant named Russell Collins (Julian Dennison) or, as he likes to call himself, Firefist. He finds himself extricated from a mutant orphanage due to his explosive anger and placed in a mutant prison. He is clearly set-up to be the younger version of Wade, and is as such a catalyst for growth Deadpool. While people who have seen Hunt of the Wilderpeople will instantly recognize his character (he is basically Ricky Baker with fire powers), his odd brand of humour and obvious pain bring some needed variety to the proceedings.

But it is when the incredibly lucky Domino (Zazie Beetz) enters the fray that the movie truly clicks into gear. Of all the mutant powers we have seen visualized over the years, the power of luck is by far the weirdest so far and the hardest one to visualize which makes it all the more delightful when she does display her powers during a highway robbery in one of the most exciting segments of the movie. That prison break also highlights one of the other great strengths of the movie in that the action choreography is much improved, which isn’t surprising given that director David Leitch’s previous credits include John Wick and Atomic Blonde. While Deadpool 2‘s action does not approach the inventiveness of those two modern action classics, it is miles ahead of its CGI-laden superhero peers.

Unfortunately this does not save the film from stumbling along the way. The move to give Deadpool a meaningful story-arc is laudable, except it comes at the expense of killing of a female love interest (ala “fridging”). The effort to give the movie a tighter plot helps in making a more cohesive end product, but it also makes it less distinct from the increasingly gargantuan slew of superhero movies out there. And the movie is stuck in a Catch-22: the humour of the original is obviously not enough to sustain a second feature and directly undermines the more serious story the sequel tries to tell, but to lose the humour would turn it into a generic superhero movie.

Deadpool 2 is ultimately a victim of its predecessor’s success. The superhero genre has taken into account the best lessons that the original Deadpool had to offer, which ultimately makes the sequel seem derivative and less groundbreaking as a result. Even by the end it seems that Deadpool himself has run out of reasons for his continued existence, ceding his legacy to a new team of super-powered heroes. Perhaps this is for the best.