With July 1 only a day away and with temperatures about to hit 33 degrees (Centigrade) over the weekend, it is safe to say that at least here in Southern Ontario (sorry, Newfoundland) that summer is officially here. So to celebrate I’ve decided to go ahead and rank (arbitrarily and with a host of movies probably missing) the best movies that get me into the summer spirit. Now note: this isn’t a list of the best blockbuster movies released in summer (that will come later). Rather it is simply the best movies to evoke the season. I’m sure you have your go-tos in that category. Here are mine: 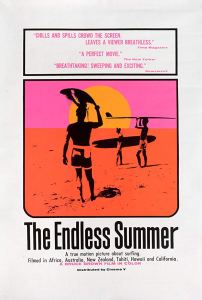 Are there better movies that are set during the summer? Probably. But I cannot think of a better movie that epitomizes the spirit of summer better than this corny little travelogue of a movie where two surfers decide to chase summer around the world in order to find the perfect wave, meet some new people, and generally have a good time. Set to the classic sounds of surf music, with frequent panoramas of beaches, and with a pace that can generously be described as lackadaisical the movie captures perfectly the meandering spirit of summer. 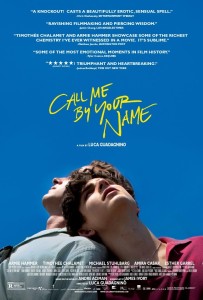 This is the newest film on the list, which as always means that it’s place is at least slightly tenable. But when I think of the ideal summer, I doubt I could come up with much better than wiling a few months away in the lazy sun-kissed hills of Northern Italy. Add in the aching and melancholic joy of first love, as Luca Guadagnino does so masterfully here with  able leads Timothee Chalamet and Arnie Hammer, and you have the perfect portrayal of the best kind of teenage summers we used to have, or at least wished we did – heartbreak and all.

On a late sumer day, two desperate and first-time robbers Sonny (Al Pacino) and Sal (John Cazale) attempt to hold up a bank and in typical fashion things go awry and in a hurry ending with the two of them holding up the bank employees as hostages as seemingly the entire Brooklyn police force has descended upon the bank. The sweltering heat of late summer is as appropriate a metaphor for this movie as anything else in this movie as Al Pacino gives perhaps his most “Pacino” performance (which is saying something) as a desperate man trying to find a way to get out on top in spite of the overwhelming odds against him.

As in the previous “Best” list I made, trying to decide exactly which of Linklater’s Before trilogy to add here was an excruciating exercise decided by the smallest (and most petty of margins). Thus, while Before Midnight is easily the most acerbic of the Before movies, its setting of coastal Greece overlooking the Mediterranean Sea just seemed to be a (slightly) more appropriate summer setting than Vienna (Before Sunrise) or Paris (Before Sunset). I cannot think of a more pleasant setting to hold raw marital arguments that cause existential crises as the long differences in Celine (Julie Delpy) and Jesse’s (Ethan Hawke) outlook of life reach an explosive boiler-point. 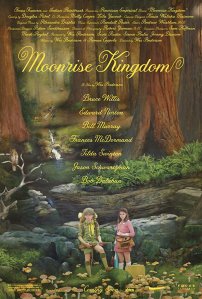 Longtime readers should know by now that any chance to shove a Wes Anderson movie into the proceedings is one I’m going to take with full gusto. In this case Anderson pportrays what I always imagined summer camps, and camping in general, would be like as the young Sam Shakusky steals away from his camp and runs away with the love of his life Suzy Bishop on the wilderness island of New Penzance. Real camping has taught me that there are a lot more bugs, uncomfortable roots, and all around discomfort than the brochure advertised (this blog is called Homebody Movies after all), but at least thanks to Moonrise Kingdom I can always imagine the whole endeavour more romantically. 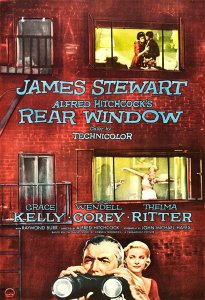 I remember when I was about 50 pounds heavier than I am now I took a hike on Memorial Day, tripped on a branch and messed up a whole bunch of things in my ankle. I was stuck in a walking boot, mostly indoors in the sweltering summer heat until the boot finally came off on Labor Day. So to say that I have a spiritual connection to Rear Window’s Jeff (James Stewart) as he spies on his neighbours while trapped in his apartment with a broken leg is an understatement. In typical Hitchcockian fashion however, Jeff’s innocent(ish) voyeurism causes him to stumble on something much darker going on leading to a movie that is as thrilling as any of Hitchcock’s other works in spite of – or perhaps because of – the severe self-imposed limitations of the filmmaking here.

It is truly amazing and frightening how Spike Lee’s Do The Right Thing is increasingly becoming an accurate portrait of the brokenness of race in America. Set during a scorching hot day in a New York, it sets out to show what is probably a typical day in the life of a neighbourhood that horribly and tragically goes South when long-simmering and unspoken racial tensions finally break out into the open shattering the trust and tenderly-held peace while leaving the neighbourhood with many villains and no true heroes. If ever there was a movie that is requirement viewing today, this is it. 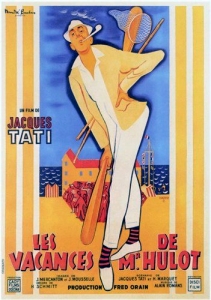 I stumbled upon this movie at the Music Box in Chicago while (coincidentally) on vacation and so it was easy for me to spot that this gem of a comedy had achieved that elusive status of art imitating life. Jacques Tati pays such close attention to the details that he can’t help but capture, and exploit to great comedic effect, all the minor absurdities that accompany people going on vacation. His M. Hulot tries, and often fails, to follow all the unspoken rules of polite vacationing and yet seems to be one of the few who truly seems to be enjoying the experience. The movie’s comedy is one borne out of gentility and kindness in stark contrast to the mean-spiritedness that often seems to define an American summer holiday comedy. Like any great vacation Monsieur Hulot’s Holiday is one I can’t wait to visit again the moment it’s over. 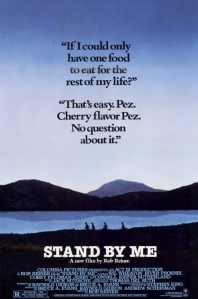 Of all the things I mourn about becoming an adult, it is losing the joy of the aimless wandering adventures of the school vacations of our childhoods. No movie in my opinion captures that spirit more perfectly than Stand By Me as four childhood friends decide to hike around their hometown in search for a missing boy or presumably, his body. It is exactly the kind of foolhardy adventure that only kids who have neither the foresight nor the experience to know any better could conceive. It is a classic and bittersweet coming-of-age film, poetically set at the end of summer and a wonderful homage to our best memories of childhood.

So heinous is the thought of the fourth of July celebrations, and by extension summer, being cancelled on Amity Island that the whole community – sans a few cooler heads – basically agrees to look the other way at a series of heinous and fatal shark attacks in order to have their fun. While it is on the one hand a powerful fable about foolhardiness, it also poignantly underlines just how important the season of summer is to all of our collective psyche’s. Summer and all the promise it brings is more than just a chance to relax and recuperate; it is the release valve for our sanity. And shark attacks be damned, we will let nothing stand in our way of it.

And finally here are a few movies that might have been shoo-ins for the list except I limited it to one movie per director:

And with that dear friends, it is time for me to take my own summer break as well. I’ve got family coming through in the next few weeks to visit and I intend to spend the time with them out in the sun instead of blogging in a dark, dreary room. See you in three weeks!