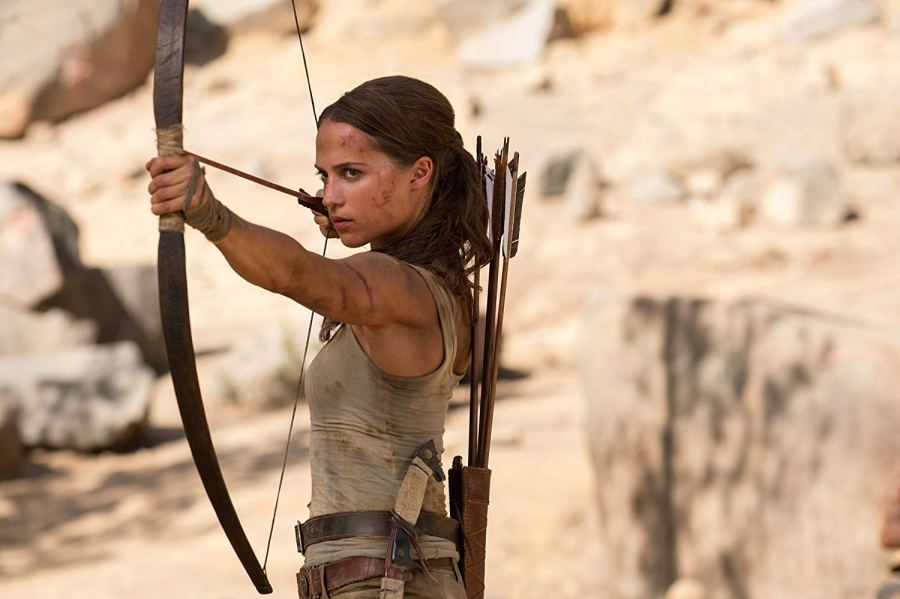 During the infancy of the superhero genre when Hollywood time and time again demonstrated that they did not have a clue about how to bring comic-books to the big screen I was able to take solace in one thing: at least these weren’t based on video games. From the days of Super Mario Bros. all the way to last year’s anemic Assassin’s Creed Hollywood has consistently failed to turn video games into anything remotely resembling competent filmmaking. The true irony of Hollywood’s systematic failure is that in the intervening decades when Super Mario Bros. was first released the video game industry has exponentially gotten more cinematic in its storytelling weaving intricate dramas over a variety of genres and types of games.

There have been many think pieces about why video game movies have failed so far, and it isn’t necessarily productive for me to run through them. However recently I caught up with two video game movies (available at the right/cheapest rental price) that shockingly seemed to get things mostly right. Honestly neither of these movies are going to end up on my “best-of” lists of the year, but compared to the low, low bar set by video game movies so far these two cleared it by leaps and bounds. Perhaps these are two outliers in an overwhelmingly downward trend, or maybe these are signs that maybe Hollywood is finally figuring this enigma out. In either case, I figure I’d celebrate: 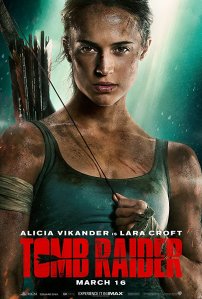 Tomb Raider as a video-game franchise is a fascinating study in the evolving views of gender for the industry. Originally, the heroine Lara Croft was a little more than a sex object, a heavily endowed female Indiana Jones meant to appeal to pre-pubescent boys. And that is precisely where her appeal might have stayed were it not for the fact that Tomb Raider games were also pretty good, and remained more or less so for the next 18 years. However with each successive Tomb Raider video-game the spectre of sexism continued to grow as most of the attention was paid to Lara’s figure and not to the actually fairly competent adventuring she got up to. The two Tomb Raider movies starring Angelina Jolie did little to change that perception.

Thus inevitably the video-game series got a reboot – one that was phenomenally received as it focused on Lara’s physical abilities rather than her attributes and was a much more gritty and realistic take on the character. It also wisely decided to turn Lara not into some superhero who is seemingly impervious to damage, but into a more vulnerable human being.

It is this video game reboot that the latest Tomb Raider draws its inspiration from and it is all the better for it. For starters, getting Alicia Vikander to play Lara Croft is one of the better casting decisions I’ve recently seen. Vikander embodies someone who could believably perform the variety of stunts and physical tasks Lara will be put through while still maintaining a level of vulnerability to keep us invested. She displays grit, determination, and a fighting spirit that is all-too-rare in the action-adventure genre that tends to treat women as eye-candy and male exposition vehicles. The only times we are invited to gaze upon her is when she displays her strong physicality by creatively taking out any number of faceless goons. She is just as able taking out men with a bow and arrow as she is in throttling them with her bare hands. And most importantly, the purpose of her quest is decidedly not male-dependant – she seeks Himiko not for some romantic purpose or even to find her father but rather to discover who she is meant to be. Such an arc shouldn’t be innovative in this day and age as countless male protagonists have been given the same arc without a beat. But that this is freely given to Lara Croft feels revolutionary.

All this also makes Lara easy to root for, thus perhaps making this video game movie closer than most in replicating the player experience. So often in video games the protagonist of the story tends to be a blank slate which in turn allows the player to fully immerse themselves into the character. It is often this blank nature of the character that makes it so difficult for videogame adaptations to succeed, the heroes tend to be bland and forgettable. Tomb Raider seems to have figured out the simple solution to this problem – make your heroine compelling and relatable. And this, more than anything else is why it is one of the best videogame adaptations ever made.

The story itself is nothing terribly original, and would work beat-for-beat as an origin story for Indiana Jones. We encounter Lara Croft as a simple bike courier who can hold her own in a boxing match and outsmart a bunch of fellow bike couriers in a high-stakes game of chase (as opposed to our introduction of Jolie’s Lara, where we encounter her taking a shower). She gets caught up trying to find Himiko “the first queen of Japan” – the same quest that caused her aristocratic father Richard (Dominic West) to disappear years ago. This sends her hurtling across the globe from London into a remote island off the coast of Hong Kong with breakneck speed where she finds herself racing against time to find Himiko and trying to stay out of the clutches of some bad guys trying to get to the treasure first (led by a scenery-chewing Walter Goggins). The action is competently told, even if it feels a little generic – with all of the movie leading up to the actual “tomb-raiding” being much more interesting than its Indy knock-off climax.

Still, “pretty good” is a significant milestone for a genre long defined by movies that have ranged from mediocre to unwatchable. And it succeeds because the filmmakers managed to crack the elusive code of how to mimic the immersiveness of a video game: by giving us a protagonist we can easily and unabashedly root for. 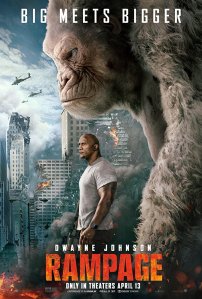 Like Tomb Raider, Rampage does well by adpating a movie in the spirit of the original video game. Unlike Tomb Raider however, the original game is nothing but a Kaiju-based smash-em-up arcade game where the story is a string of barely coherent excuses to justify the carnage involved. Similarly, though the movie itself tries to establish some sort of narrative, it is a poorly disguised excuse for mayhem. Fortunately this is precisely the perfect tone for the movie. With Dwayne Johnson at the helm employing his charismatic and charming self the movie is at the very least easily entertaining in the way most of his WWE promos as the Rock were.

In this case Johnson is Davis Okoye, a primatologist who is thrust into the deep end when his monkey friend George is infected by some genetic experiment that turns him into a giant (by the way, primatologist is perhaps only the third-least implausible movie job Johnson has held). As with any role Johnson takes, he gives 100% to his performance even when the material clearly doesn’t require him to, leading to a campy performance as the straight guy in a gonzo movie.

Meanwhile not on the side of the angels is the dual forces is Malin Akerman and Jake Lacy playing siblings who own a multi-national corporation that is, naturally, responsible for the George’s genetic mutation and the mutation of a crocodile and wolf respectively. And, as is unsurprising in a movie like this, the bad guys want to use the genetic experiments for their own financial gain. It involves a bone-headed plan that they would never in a million years be able to get away with, but then again this movie does not deal in anything resembling realism. There is also a government agent doing something shady/heroic (I could never tell) played by Jeffrey Dean Morgan to add to the confusing swirl of allegiances at play in this movie that never takes itself seriously.

Clearly, since smarts are off the table for this movie, the only hope we have of a salvageable movie is in some blockbuster B-movie material, and it is in this respect that the movie delivers. This movie is basically a glorified excuse for carnage and mayhem as the movie works to get all three of the big bad monsters into Chicago in order to lay it to waste. Meanwhile Johnson gives us just enough of a human element to maybe care. But this is ultimately just fine by me because it is perfectly in keeping with the source material. The video game itself has no major narrative to speak of, just a slew of cities for our three monsters to destroy. Giving the movie any sort of deeper narrative beyond the extremely silly camp they went with would completely go against the tone of the video game. Instead what we have here seems just about right.