Do yourself a favor: Before strapping yourself in for this Brad Pitt star-vehicle, ignore any of the promotional material surrounding the movie, which hints at some sort of science-fiction action extravaganza that provides cosmic level entertainment. Anyone going in expecting that is bound to be disappointed. Ad Astra stands firmly instead in the tradition of universe exploration films like 2001: A Space Odyssey, Contact, Interstellar, and Arrival that uses the cosmos as the backdrop to ruminate on what it means to be human.

After a EMP-pulse related disaster in the near future that nearly kills Roy McBride (Brad Pitt) at a miles-high space antenna station, he is quickly recruited into service to try and make contact with his astronaut father (Tommy Lee Jones) who disappeared decades ago on a voyage to Neptune to search for intelligent life. McBride’s superiors feel that his father is directly responsible for the EMP-pulses and his mission is simple: Go out to the edge of the explored universe to stop the pulses by any means necessary.

Of course, even though this is a simple journey, it is not an easy one as Roy slowly but surely has to detach further and further from humanity; first in a journey to the moon, then to the last human outpost on Mars, and finally to the isolating cold of the outer rim of the Solar System. In doing so, Roy undertakes a journey not dissimilar to Martin Sheen’s in Apocalypse Now in yet another modern riff of Joseph Conrad’s Heart of Darkness. In another way, as the only son sent by the world to save us from a potentially unhinged and wrathful father, it is also an interesting reverse-Christological movie, a desperate quest for immanence in the face of an indifferent transcendence.

Ad Astra is not a movie that gives up its lessons easily, something that is bound to frustrate most people who go to see this movie. It is often ponderous, heavy-handed in its themes, and altogether pro-active in its humorlessness. It revels in silence, in strangeness, and begs you to ruminate between the lines. One viewing is bound to leave you feeling like you have barely grasped its surface, while the thought of a second viewing is daunting. In other words, it is no surprise that, when compared to the recent glut of crowd-pleasing space movies like Gravity, The Martian, and even to some extent Interstellar, that the movie ends up feeling like a flop.

Fortunately, the movies Ad Astra reminds me the most of happens to fall exactly into the same category of ponderous and obtuse space movies that presume to take us to the cosmos when really they are more interested in the unknowable interior of our lives, namely Solaris and 2001: A Space Odyssey. I do not bring up the comparison lightly. In both of those cases I was left severely underwhelmed by my first viewing and mentally exhausted trying to piece together the deeper meaning of what I’d just seen. And yet in both cases, I eventually found myself returning time and time again, intrigued by these movies’ mysteries and appreciating their artistry more and more.

I have confidence that Ad Astra deserves at least to be mentioned in the same breath as those movies, if not necessarily landing in the same echelon, for several reasons. The first is perhaps the most superficial in that the movie absolutely looks and sounds the part. Cinematographer Hoyte Van Hoytema returns to the same celestial terrain that he so expertly shot with Interstellar, creating a visual palate so majestic it begs introspection and awe (a lunar-chase on the moon is captivating both for the rare visceral thrill it provides as it is for its eerie beauty). Meanwhile composer Max Richter, long known for his intricate and hypnotic compositions (his albums Sleep and The Blue Notebooks being on my regular rotation), proves to be a perfect fit as he creates a soundscape that is equal parts meditative and disconcerting. Then there is the production design, which skirts the line between being inspirational for the way it anticipates a possible future and depressing for the way it reflects the banality of our present. The promise of traveling to space bases on the moon and Mars is easily undercut by the fact that Applebees follows us there, while the excitement for the public to travel to the stars is rendered moot when apparently, and all to believably, the companies that will send us there will also upcharge us by three figures for the privilege of getting a pillow and blanket on our way there.

If the cinematography, score, and production design provide the perfect frame for this movie, it is fortunate that standing in the middle is an actor like Brad Pitt who, along with his starring role in Once Upon a Time in Hollywood, is having quite the banner year. Although the movie is populated by a number of welcome supporting turns, including  Donald Sutherland, Ruth Negga, and cameo-of-the-year nominee Natasha Lyonne while Tommy Lee Jones haunts the movie’s periphery like a specter, this is truly Pitt’s movie especially as his journey takes him further and further to the end of explored space. While Pitt’s leading man credentials have never really been in question, it is somewhat revelatory to see him carry a movie this sparse effortlessly while doing so little. His ability to emote with only the slightest of facial movements goes a long way in carrying us along his journey; his frequent interactions with an A.I. psychologist prove to be some of the most tense moments in the movie as Pitt expertly portrays a man trying to fool the A.I. into thinking he is stable when clearly he is not. The story of a man who literally has to go to the end of the world to jettison the toxic masculinity he inherited by his absent father could easily be maudlin, but with Pitt those themes are given real weight and the struggle a sense of painful realism that it becomes easy to choose to follow his journey. He is very much the anchor and guide we need to take us into the cosmos, even if he does not hold our hand reassuringly.

Similarly director James Gray (Lost City of Z) refuses to extend any sort of hand-holding to us as viewers. To some that might be disappointing and an excuse to check out of this movie. That would be a shame, because even though I do not know one week after seeing the movie exactly how I feel about the movie (and my star-rating at the end should be seen through that lens), Ad Astra is precisely the kind of movie that this modern cinematic landscape needs. It is a movie that demands you reckon with it and with its message, and isn’t going to spoon-feed its answers to you. It is a movie that left me wanting to see it again simply because I couldn’t get out of my head, and frustratingly so. It is a movie that demands to be reckoned with, so do yourself a favor and do that as soon as possible.

Rating: ★★★★(although honestly a second and third viewing could move this rating either to five stars or three, right now I’m just hedging my bet) 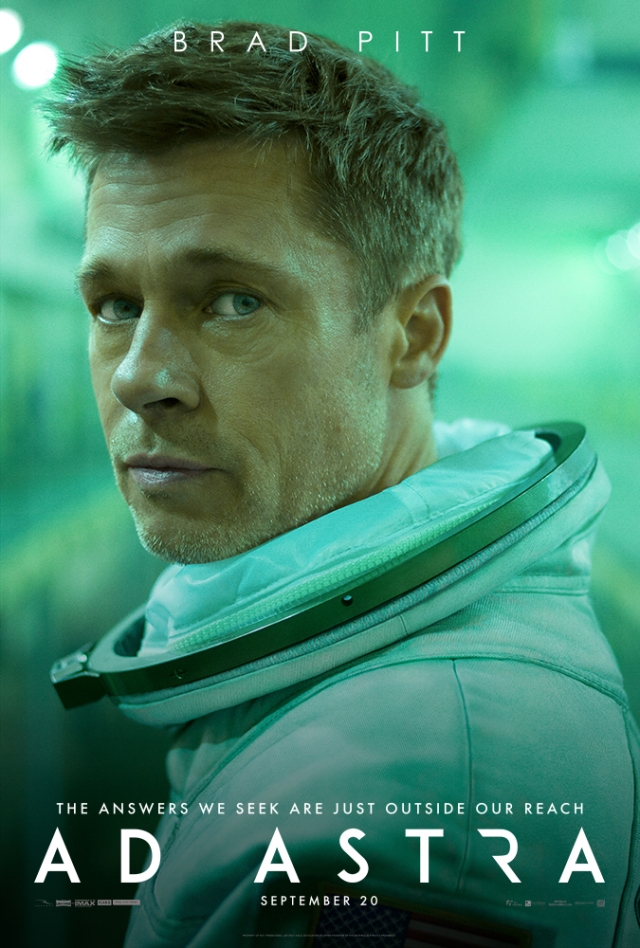