Last year was year two of my ongoing pledge to watch 52 films made by women a year. Unfortunately while I have come close, I have failed to reach that goal in both of those years. But rather than feel defeated, I’m going to take solace in two things:

But enough excuses. The #52filmsbywomen challenge for 2018 starts now. Let’s get to the movies I’ve seen this month:

(p.s. If you want to take the same pledge I’m taking check it out here.) 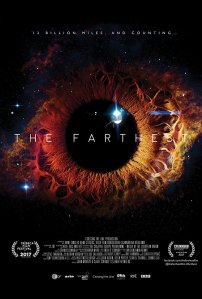 It is somewhat surreal to be watching a documentary about a piece of history that is still at this moment hurtling through space billions of miles away from us and is a piece of our shared human legacy. Emer Reynolds documentary focuses on the people who were behind one of mankind’s greatest achievement, namely the Voyager 1 and 2 spacecrafts. It is a conventionally told story featuring talking heads as we got a behind-the-scenes look at all that led up to the launch of these two spacecrafts that have travelled further away from earth than any other human object in history. And yet, despite its lack of ambition from a structural standpoint, it is almost impossible not to feel inspired by the documentary. And surprisingly enough, what was most inspiring was not the most famous aspect of Voyager which was the inclusion of a record of music and data to be broadcast into the universe for whomever might be out there. But the most inspiring part of this story is hearing these rocket scientists and engineers talk about the the actual scientific knowledge we gained from the Voyagers trek through the universe. The whole documentary is basically a showcase of how small we are in the universe, and though that may be humbling to a certain respect it is also exhilarating because we are a species who have voyaging and a quest for knowledge inbuilt into our DNA. In the imminent spaces we find ourselves in its easy to get bogged down in the minutiae of our general awfulness (especially given how we behaved as a species last year). The Farthest, in an old fashioned way suggests that maybe we should set our gazes on things above instead and it might just be the message we need to hear right now.

Ray Eddy (Melissa Leo) is a mother of two who is barely getting by after her gambling addict husband takes off in the night with their cash that she was going to use to buy a better trailer. Lila Littlejohn (Misty Upham) meanwhile works in a bingo hall on a Native American reservation, lives alone, and has a son who she is not allowed to see. Their paths cross when Lila comes across Ray’s husband’s abandoned car and takes it for herself and Ray furiously tries to take it back. After confronting one another, Lila makes a proposition: she’ll return the car if Ray will help her smuggle illegal immigrants across a perilous frozen river that borders Canada for a lucrative payout. Ray, who is severely in debt and whose children are currently eating popcorn and drinking Tang for meals, agrees and so her uneasy partnership of convenience with Lila begins. While the initial premise might suggest that the movie will be a somber tale about poverty, it quickly turns into a thriller as every successful smuggling trip over the perilously frozen river where they manage to evade border control brings these two women closer to their goals with Ray desperate to fork up the cash for her downpayment on the trailer and Lila trying to get enough money to reclaim her son. This makes the stakes extremely high in this frigid thriller that remains compelling from beginning to end because it takes a cold, hard look at the realities of the corners of our prosperous society that gets left behind and spits our privileged morality back in our faces. When the ultimate goal of these women’s illegal ventures is to literally provide food and shelter for their children, who are we to judge?

A Woman, A Part is a small indie story about a successful TV actress (Maggie Siff) who finds herself frustratingly pigeonholed into being nothing more than a cypher for her male co-star. After a meltdown on set, she decides to take a break and return to New York where she meets up with her former theatre group (consisting of Cara Seymour and John Ortiz) and finds out that she both seamlessly slots into where she was before in the group and yet also finds herself alienated from her former life. It is a typically mumblecore sort of movie where the plot meanders and the revelations come in passing conversation. However unlike most mumblecore films, this film also seems to play like an essay about women’s roles in media where some parts are almost glaringly obvious in its exposition. And while it is clearly trying to make some point about the lack of equality in women’s roles in media, it chooses to do so in a way that seems at least slightly dated. The “cypher” problem for women has been mitigated somewhat by many shows that have placed complex women at the front and centre whether it is The Handmaid’s Tale, The Queen, The Marvelous Mrs. Maisel, Jane the Virgin, or Glow just to name a few at the top of my head. The irony is that Siff is currently in a role on the show Billions that can easily be a counter-argument to this movie’s central message. Fortunately while the parts of the movie that focus on media are the film’s weakest, the three leads are compelling. They are just not compelling enough however to make this movie remotely memorable or interesting enough to remember after the credits have rolled.

The Barkley Marathons refers to a 100 mile trail race (or 130 mile, depending on who your ask) that goes through close to 120,000 feet of ascent and descent and is meant to be completed in less than 60 hours. To run it is as close to the definition of insanity as one can get, and the man who created it, Gary “Lazarus Lake” Cantrell, is a certifiably batshit crazy man. Only a handful of people have ever finished the race and this documentary chronicles the running of the race in 2012, from the moment invitations get sent out until the last race collapses. As far as direction goes, the documentary does not really do anything innovative and is mostly perfunctory. But who cares about that because the subjects of this documentary are so fascinating. There is Lazarus Lake, who seems to have walked right out of an Errol Morris documentary into this one. Every single moment he has onscreen is a chance to hear some insanely entertaining anecdotes spew out of his mouth as he tells us the story behind the creation and organizing of the Barkley Marathons. Then there is the race itself, which quickly turns the documentary into a fascinating war of attrition and a real life Journey into Mordor as contestants battle oppressive weather, unforgiving terrain, sleep exhaustion, and truly evil briers to try and outlast the Barkley. As each contestant falls, the race quickly becomes an examination of human limits and failure and one can’t help but evolve from a passive watcher to someone actively rooting for these insane trail runners as they try to beat the seemingly unbeatable course. In short, it is the most entertaining and thrilling documentary I’ve seen in years.

Kelly Reichardt movies are exercises in anticipation. Often the tension in her work lies not in what is happening than in what could happen and in her best films like Meek’s Cutoff or Certain Women, examining what could happen and why it doesn’t often leads to something profound. Unfortunately Night Moves is the closest Reichardt ever comes to making a thriller-heist movie and the conventions of that genre push in on her usual interests resulting in a movie where way too much plot happens to play into what makes a Reichardt movie great but not enough happens to satisfy what we want from a heist film. Starring Jesse Eisenberg, Dakota Fanning, and Peter Sarsgard, the movie details their quest as eco-terrorists to try and blow up a dam in Oregon and their quest to get away with their crime. The first half of the movie is a taut crime procedural as the three come together to devise their plan,  gather all the necessary pieces for the plan, and then execute it. The back end of the movie however becomes an examination of disappointment and regret as the three come to terms with what they have done and its consequences. Both halves of these films are excellent in their own regard, however the two halves just never congeal in an organic way leading to a disjointed viewing experience. It is by no means a terrible movie, but it is nothing more than good enough to justify watching it once.