Continuing my never-ending quest of diving through all my Criterion movies, this month I decided to tackle a bunch of my screwball comedies. Of course given the enormous magnitude of my collection, I was only able to get through maybe half of my Criterion screwball comedies at best. To be fair, as the high number of most of these spine numbers will indicate, screwball comedies seems to be something that Criterion has increasingly devoted its attentions to (and I am certainly not complaining). But the fact remains that I clearly have a collector problem. Here we go:

When Hildy Johnson (Rosalind Russell) shows up at her old stomping grounds in a newspaper workroom with her soon-to-be insurance man husband, it sets into motion a frenetic chain-of-events that is bound to leave the viewer exhilarated, but thoroughly exhausted. A huge source of the frenetic energy of this film belongs to her newspaper editor, and Hildy’s ex-husband, Walter Burns (Cary Grant) who finds Hildy’s reason for leaving the business and getting married troublesome for two reasons. First, he is naturally still very much in love with her and thus wants to keep her from marrying beneath her. But the second reason is much more intriguing. He doesn’t want her to leave because she is really good at her job and thinks it would be a betrayal of her integrity for her to trade her job for marital bliss. This is slightly shocking given the fact that it is a blatant rejection of the traditional view of a woman’s place in the world – and rightly so – and this systematic undercutting of the conservative view of a woman’s role is among the many satiric highlights of this movie. Walter’s way of keeping Hildy in her job is by luring her into one last story about a man about to be executed and in predictable screwball fashion things get out of hand quickly and in the most complicated way possible leading to betrayal and counter-betrayals, deceit on multiple levels, and some of the wittiest comedy you will ever see. The jokes land so fast and on top of one another that your brain has barely has any time to register just how perfectly composed each joke is. I’ve seen this film multiple times, and each time I’ve unearthed yet another joke that eluded me before because I was too busy laughing at a previous joke. This is a true heavyweight of comedy, with Grant and Russell masterfully holding the centre of its swirling chaos. 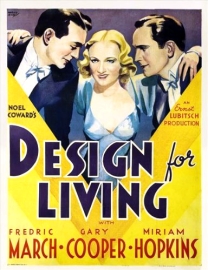 Most screwball comedies tend to poke fun and deflate the myth of the patriarchy by providing females who not only challenge the masculinity of their suitors but come out on top. However Design for Living doesn’t just poke fun at the patriarchy – it practically stomps on it and kicks it out the door. Miriam Hopkins plays Gilda, the centre of a romantic trio, who displays a level of sexual frankness that had not been seen before and probably would not reappear again onscreen for perhaps another thirty years or so. Fredric March and Gary Cooper play two best friends who happen to fall in love with her which isn’t necessarily revolutionary in itself. The true revolution of this film is that Gilda admits that “a thing happened to me that usually happens to men.” She has the audacity to fall in love with both of these men, and not just in the coquettish way most film stars play a woman falling in love with men but in a frankly sexual way – a sexual way that she most definitely acts physically upon. So the tension – and comedy – of this movie is found in the in-numerous ways this trio tries to resolve the apparent difficulty of maneuvering around this menage-a-trois of sorts while delighting in stomping on the prudish sensibilities of certain audience members. This was a pre-Code film released in the dying days before the Production Code came into effect and one can’t help but see it as a figurative middle finger to the absolutely ridiculous (and hypocritical) morality of that Code. And what a gloriously funny middle finger this film is. 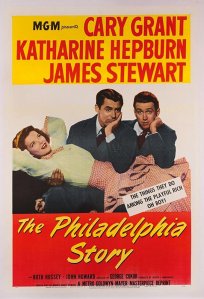 Seeing this movie after Design For Living (review above) it is interesting to see how The Philadelphia Story mines the same material of a woman possibly falling in love with two men, but the Production Code forces the film to skirt the same topic in a much more chaste way. Much like in most screwball comedies the setup is a classic one: Tracy Lord (Katherine Hepburn) is an aristocratic divorcee just about to get remarried to a wealthy banker and standing in her way is her ex-husband Dexter (Cary Grant) and a cynical reporter Mike (James Stewart) who each have their motives for undermining the upcoming wedding. However while Design For Living used a similar framework to undermine the social mores of a patriarchal society, The Philadelphia Story is a movie that spends most of its time merely poking fun and then ultimately reinforcing patriarchy’s basic premises. Fortunately Hepburn, Grant, and Stewart form what is undoubtedly a powerhouse cast and to watch them go through the paces of verbal gymnastics and comedic timing in this movie as effortlessly as they do is sheer delight. 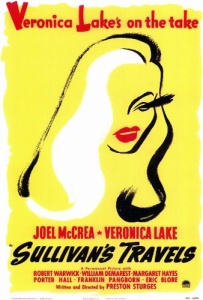 Over the weekend a whole bunch of grumps got up in arms that a larger group of people were seen to be publicly enjoying the charming pomp and circumstance of the Royal Wedding while the world was seemingly burning. Those grumps would find their spiritual ancestor in John L. Sullivan (Joel McCrea), a director of frivolous but much-loved comedies, who despises his work because it doesn’t portray the life of the poor. And so in an act reeking of his privilege, he decides to disguise himself as a hobo in order to fully experience his life as a poor person – all as material for his heartfelt adaptation of “O Brother Where Art Thou.” The whole movie is an object lesson that tries to show that (a) comedy is not a “lesser” art and can function as a force of good in a painful world and (b) the poor do not want to be condescended to. There is a way that this story could have been told that would have made it an uproarious and farcical comedy, in which Sullivan’s noble intentions come repeatedly undone by the people he tries to represent who have no interest of being condescended to. But surprisingly after an initially strong comedic opening the movie quickly becomes a more dramatic movie. It is ironic that the only way Preston Sturges – a great comedic director – could conceive of making a defence for the inherent goodness and power of comedy was to wrap that argument in a melodramatic and often-times preachy film.

Ellie (Claude Corbette) is a rich socialite on the run from her wealthy father because he wants to have her recent marriage to an apparent fortune-hunting man annulled. While on a bus to New York she bumps unsuspectingly into Peter (Clark Gable), a down-on-his-luck newspaper reporter, who instantly recognizes her and smells a story works. And so he strikes a utilitarian bargain with her: he will keep her identity a secret and help ferry her to New York in exchange for an exclusive from Ellie. Naturally the two begin at loggerheads with one another, with Peter being annoyed at Ellie’s upper-class sensibilities while she cannot stand his straight-talking and mercenary nature (the flip-side of the deal was that he would tell her father immediately where she was if he refused). The sharp witted movie was the first movie to win the “Big Five” Academy Awards (Picture, Director, Actor, Actress, Writer) and that quality shows in this delightful gem of a movie. Gable and Corbette have the perfect chemistry in that simultaneously you believe that they are equals, drive each other up the wall, and could plausibly fall in love with one another (as they inevitably should). And thanks to this being one of the last movies to be released before the puritanical Production Code kicked in, it is the rare screwball comedy that allows us to gaze into more intimate (but still very chaste) parts of their burgeoning relationship. Toss in a couple of iconic scenes and you have a movie that more than lives up to its stellar reputation. 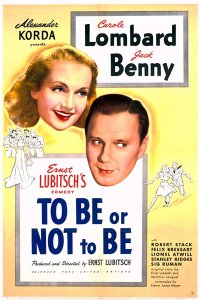 In this wartime screwball, a troupe of actors suddenly find themselves thrust into the heart of the war in Warsaw when they find out that their acting abilities allow them to infiltrate and make absolute fools of their Nazi occupiers. To laugh at a monster is to strip it of it’s power and this is precisely what Ernst Lubitsch planned to do when he trained his eyes on Nazis in this screwball tale. Of course like most films made in the midst of World War II, it looks like it might be pulling its punches with regards to Nazis because they are made to look mostly like a toothless and slightly bumbling totalitarian force. Of course there was no way in 1942 to anticipate the depths of monstrous evil Nazis would inflict through the Holocaust (another key example is Charlie Chaplin’s The Great Dictator). But to fault a film for this lack of foresight would be a mistake as To Be or Not To Be is on its own terms a bold and provocative work, not just in effectively skewering a loathsome ideology but also in turning the screwball comedy genre on its head. While the stakes in most screwball comedies are small and played for farce, this acting troupe are faced with stakes that are decidedly more life-and-death. This makes the comedy much darker, but also much more exhilarating and thrilling to watch as they dodge impending death and doom with much comedic aplomb resulting in a vital and most excellent comedy.

Astute readers will notice I’ve switched to a five-star system. The switch comes mostly because I finally figured out how to insert stars onto the blog (yes, in many ways I remain a technical n00b) and the five-star system seems to be the movie critic industry standard. You will also notice that I have retroactively regraded all my previous reviews on the blog to this five-star system. Also while I have you here, I’ve also recently created a handy Review Index of all the movies I’ve reviewed. Thanks for reading!

One thought on “Adventures in Criterion Vol. 2: Screwball Comedies”