In our cinematic age of uber-franchises dominating theatres across the globe, no two franchises have suffered as much ridicule and fan-rage as the Transformers movie series and the DC Comics Extended Universe (DCEU). The Transformers franchise – based on a 1980s cartoon that was blatantly an extended toy commercial – found its reputation ground into the dirt mostly because the director Michael Bay (rightly or wrongly) seemed to have open contempt for the kind of (male) adult who would find any sort of emotional connection to a bunch of toys. The DCEU suffered because its main director Zack Snyder seemed to operate on the wrongly-held belief that making everything in the colorful DC comics universe “darker” gave it some sort of coherent emotional heft (versus its jokier Marvel rivals) which instead of breeding excitement in fans ultimately pounded them into a state of emotionally numb exhaustion.

In both cases, the franchises had basically bled the goodwill out of fans so low that basically all our expectations (and excitement) for future installments were either extremely pessimistic or nonexistent. In my own case, my journey in Bay’s Transformers universe led me from mildly defending the original entry Transformers to not even seeing the fifth entry The Last Knight after being burned on the fourth entry Age of Extinction which I felt was a waste of money, even though I rented it for the low, low price of 99 cents. Meanwhile the low point of watching Justice League (again, not in the theatres but on VOD rental) was basically 100 minutes of me disbelieving just how much DC Comics and Warner Bros. had thrown in the towel to ever matching their Mickey Mouse-owned rivals; it almost derailed all the goodwill that had been engendered by Wonder Woman’s success.

And so it was with a little disbelief that I heard the rumblings two follow-ups in those franchises, Bumblebee and Aquaman, were in fact being met with a lot of positive feedback. Even though I’m in the middle of a mad rush of catching up with movies to put together a somewhat credible “Best of 2018” list, I knew I had to check them out. 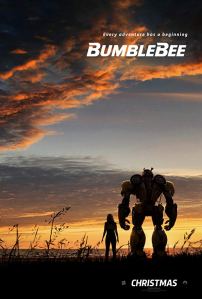 It took approximately two minutes for me to realize that Bumblebee was going to be significantly better than anything that happened in the Bay-verse Transformers movies. The movie opens on Cybertron in which we are immediately thrust into a chaotic battle. Yet unlike previous Transformers battle scenes (which can be best described as “migraine-inducing”), I found it easy to follow the action as the camera allowed me plenty of time to take in not only who was fighting the battle but where they were in relation to one another. So clear was the action choreography that director Travis Knight (Kubo and the Two Strings) dares to use this moment to also introduce us to several of the principal players, including Bumblebee himself, and set the narrative on course. Rather than a jingoistic jumble of explosions and patriotism, Bumblebee seemed hellbent on telling a story.

After the opening battle the action quickly shifts to California in the 1980s where we are introduced to the movie’s human lead, Charlie (Hailee Steinfeld), a precocious grease-monkey of a teenager who in many ways represents a corrective (and apology) for the way Megan Fox’s Mikaela Banes was reduced to a sex object in the original series (it helps that the writer Christina Hodgson is a woman). Charlie, unable to fit in with most of her peers, stumbles upon Bumblebee in hiding disguised as a VW Beetle and with his memory chips and voice box damaged. Taking him in, she joins the rich filmic tradition of loner teenagers finding friendship and solace in a being from outer space. What keeps her character from seeming entirely derivative however is Steinfeld herself who reminds us here that her talents were once deemed Oscar-nominee worthy. She not only helps us believe in her relationship with a robot, but also provides a depth of character that makes Charlie believable as a person herself.

The other half of this familiar relationship is Bumblebee himself whose ability to express subtle emotion and character through pantomime is not only a credit to the visual effects team of this movie but a damning indictment to the lazy character design of the previous movies. He borrows heavily from the same playbook that WALL-E used, and to great effect. Wisely the movie spends the most time with Charlie and Bumblebee, allowing them to fumble their way through their miscommunication problems, giving us plenty of chances to not only understand this duo but also like them. Again, this is not innovative filmmaking by any means, but it is simply testament to how bad the series was before this point that the notion a Transformers movie would allow moments for character development and would actually get us to actively root for the protagonists is a revolutionary move that goes a long way to making this the best in the franchise.

Of course outside of the central relationship there is a requisite plot to get through and the movie delivers the expected battles with both the bad robots and with the government (led by a criminally underused John Cena). But unlike in movies past, the clashes are surprisingly intimate and down-to-earth. Travis Knight seems to understand that epic scale does not necessarily translate into high stakes. And in a stark departure from the past, his action sequences are set-up coherently as he seems to go out of his way to establish where everything is and to give us a clear understanding of how each battle unfolds.

This soft reboot of the franchise does not in any way, shape, or form represent innovative storytelling, especially for anybody who has even a passing knowledge of E.T. or The Iron Giant, but Bumblebee is a testament to how a good movie can come about just by doing the basic fundamentals of moviemaking well. A good story, shot coherently, featuring likable and believable characters, with special attention paid to pacing should not feel revolutionary. But these things go a long way in making Bumblebee the best movie of the series and a promising restart of the waning franchise.

Aquaman is a ridiculous character. It’s not entirely his fault. He’s strong, but not as strong as Superman. Batman is smarter, the Flash is faster, Wonder Woman is the most iconic female character, and the Green Lantern has the whole Green Lantern corps thing going for him. Aquaman’s distinguishing powers are his ability to live underwater and talk to fish. These aren’t necessarily powers that lend themselves to taking him incredibly seriously. While his first outing in Justice League sought to downplay Aquaman’s silliness by making him a “bro”, director James Wan uses Aquaman’s first solo outing as an opportunity to fully embrace the campy nature of his character and simply go crazy with it. The end result is one of the most playful superhero movies to date, and consequently one of the most fun.

After a dutiful but unremarkable bit of backstory to catch us up with his family life, the movie finds Arthur Curry aka Aquaman (Jason Momoa) wrestling with the reality that he is the heir to the throne of Atlantis. His half-breed status which resulted in the death of his mother Atlanna (Nicole Kidman) complicates his feelings about claiming it for his own but inevitably when his half-brother King Orm (Patrick Wilson) seeks to unite the disparate underwater kingdoms in order to wage war on the surface world a combination of duty and a desire for some modicum of revenge drives Aquaman to battle. It doesn’t hurt that he is attracted to sea princess Mera (Amber Heard), the one imploring him to join the fight.

That serves as a jumping-off point for Aquaman to journey through the breadth of the ocean, from the futuristic but long-lost city of Atlantis to the terrifying ocean depths. The ocean presents an opportunity for Aquaman to delve into high fantasy where heady ocean politics are discussed by leaders who use giant seahorses and sharks as noble steeds. This is a movie in which an octopus plays war drums during an epic ritualistic duel, whales function as stealth transport, Mera uses jellyfish as clothing, and Willem Dafoe plays a grand vizier/mentor with a man bun without a hint of self-parody. Yahya Abdul Mateen plays Manta, a dastardly hired gun of a villain with a ridiculously-sized head who is given more than enough of a compelling narrative to fuel his push to centre stage in the movie. This is a movie where Julie Andrews plays a 100-ft monster, and she is only the second most ridiculous thing happening in the scene. And in a truly standout moment, Aquaman and Mera’s desperate dash to the bottom of the ocean represents the most artistically eerie and surreal scene I’ve seen in a superhero movie. James Wan throws us is at the deep end of what is obviously a rich mythology without holding our hand.  It is the kind of movie in which any monster could theoretically appear and would fit in with the mythology, and the great trick Wan pulls is in making this sense of infinite possibilities feel exhilarating.

This is not to say the movie doesn’t have some significant flaws. After an initial foray in Atlantis, Aquaman and Mera are sent on a quest to retrieve an ancient trident which sends them to numerous locations and functions mostly to establish the romantic connection between the two. And it is here that the movie stumbles as it descends into the most embarrassing romantic banter and dialogue this side of Attack of the Clones. Similarly Momoa is fantastically suited for his action scenes and when he gets to be “Aquabro”, but his limitations truly show when he’s being asked to make the more tender moments work. Thankfully the physical chemistry between the two is believable enough not to derail the movie entirely.

Additionally even though the movie truly nails the visuals for the underwater scenes (apart from some distracting floating hair effects), it suffers whenever the story heads land-bound. Every land-based location features the same uncanny valley green-screen problems that plagued Justice League with backgrounds clearly being computer generated and every scene is bathed in unnaturally soft light. Unlike in Justice League however the storytelling is compelling enough that the fakeness of the real-world locations never completely takes you out of the moment, but it is distracting nonetheless. Their sojourn into land is also the section most prone to bloat as the movie does its best to stretch its runtime to the now standard two-and-a-half hour mark.

Fortunately the land-based forays are however relatively brief interludes in the aquatic-based adventure and just about every underwater scene in this movie is a fantastic display of visual inventiveness. Wan picks his spots to impress us wisely, balancing moments of pure visual excitement with character and story beats so that it never seems overwhelming. And thanks to Momoa, these moments of high fantasy are anchored by his surfer-dude chill. In stark contrast to the dark and gloomy DC movies that preceded Aquaman, this movie feels like the ultimate corrective in its embrace of the DC universe’s inherently fantastical elements. And for the first time in the DCEU’s run, this embrace makes me genuinely excited to see what may come next. Also, Dolph Lundgren rides into battle on a seahorse. Just thought I had to get that in.