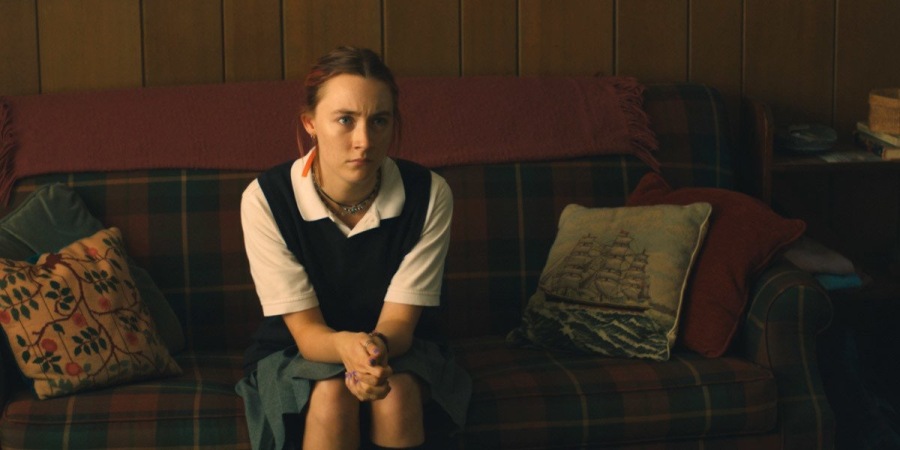 Halfway through the film Christine “Lady Bird” McPherson (Saoirse Ronan) is told by her teacher Sister Sarah Joan that “It’s clear from your writing that you love Sacramento.” This comes as a complete surprise to Lady Bird because she has spent a good chunk of her high school life talking about how much she hates Sacramento (“It’s the midwest of California”) and her desire to go to college anywhere but there. In defence she tells her teacher, “I guess I just pay attention,” to which her Sister Joan replies, “Well isn’t that the same thing? Love and attention?” A lesser screenplay would use that as the critical pivotal turnaround for Christine, leading her to immediately grasp its significance, hurtling her to a heartwarming and upbeat ending. Fortunately director Greta Gerwig knows life, and teenage life in particular, is much more complicated than that.

Greta Gerwig’s directorial debut follows Lady Bird through her final year in a private Catholic high school, and initially it seems that the movie will follow the well-trodden trail of movies about exceptional teenage students struggling to discover who they are and trying to step out on their own. But the movie is too intelligent to let this conventional plot fall into cliche. This begins with Lady Bird’s relationship to her mother Marion (Laurie Metcalf), which is as complicated a relationship as has been portrayed in a coming-of-age film where their obvious love and affection for one another is repeatedly undermined by the frequent criticisms of Marion and the rebellious barbs from Lady Bird. While it is hard to define where the two stand with one another, their messiness helps render it starkly believable and realistic. 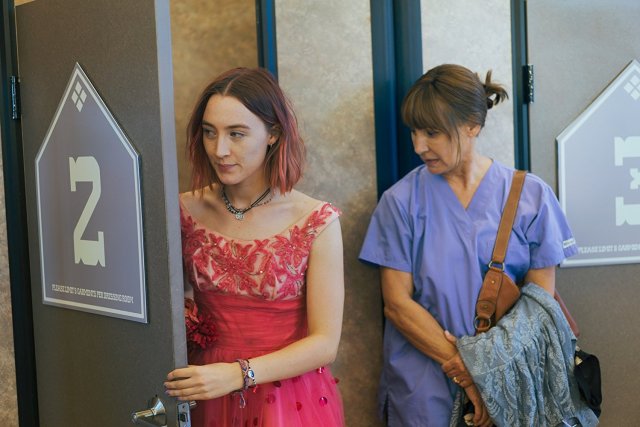 This messiness is a pervasive quality in Lady Bird as the plot basically meanders through her senior year, where plot threads are picked up and dropped, and the main story stops and starts frequently. But this is not a detriment to the film because as the title of the film might suggest, the film is about Christine and her coming-of-age. And unlike in other coming-of-age movies, Gerwig is willing to acknowledge that the process of coming-of-age is incredibly messy. It is a process where revelations sometimes happen too late to change the circumstances, where clarity comes in fits and starts, where good decisions often go hand-in-hand with bad ones, and the trivial mixes with the profound. Like the religion in which most of this story is told in, the process of figuring out truth is often mysterious, circular, and opaque. And what this process of coming-of-age is not is a clear narrative with convenient pivotal turn points to advance the plot.

In place of a clear plot, what we have to hook us into this movie is Christine and here Saoirse Ronan grabs the movie by the horns and absolutely shines. There is so much subtlety and nuance in her performance. At the beginning her face displays a mix of naivety and rebellion but by the end that same face has changed to a wizened woman on the cusp of adulthood, and the startling thing is that the change happened so gradually and naturally that we can’t pinpoint when that happened. And the joy in watching this movie, apart from its frequent humorous and touching moments, is watching this confident Lady Bird emerge. It is a performance that should be more than enough to land her a nomination for Best Actress in all the upcoming awards ceremonies.

We must also give credit to Greta Gerwig who in her first outing in the director’s chair displays an assuredness that belies her experience. It was truly a shock when I found out that this was not really an autobiographical movie because Christine’s story is so specific and so authentic that I simply assumed they had to be based on real experiences Gerwig had. But instead this shows that Gerwig has a firm grasp on how humans actually interact and behave, with each character in this story fully formed, nuanced, and as complex as Christine. It all points to a fantastic directorial future for Gerwig and cements her place as one of the most important female voices in the movie industry.

Of course while the assured performance of Saiorse Ronan and the direction of Greta Gerwig are enough to garner individual notices, it is the outstanding performance of the rest of the cast that truly catapults this movie into the best-of-the-year conversation. Laurie Metcalf and Tracy Letts each form one half of the most complete movie parents, each embodying the unique hopes and frustrations that come with the territory of parenting a teenager. They are also fantastic counterparts to one another, each with complementary strengths and real weaknesses which helps make them into a believable couple. But Metcalf and Letts are just the tip of the iceberg for a young cast that includes Manchester By The Sea’s Lucas Hedges and Call Me By Your Name’s Timothy Chalamet as Christine’s two love interests, as well as newcomers Beanie Feldstein as her best friend Julie among others. That this relatively young cast manages to punch way above their weight class in delivering dramatic chops speaks both to the talent on display and the skill of Greta Gerwig to draw those performances out of them.

The movie is absolutely remarkable and drew me in. I came out of the movie struggling to articulate exactly why this was so. But much like Christine’s own journey, the more I pondered and paid attention to what was going on, the more its warmth and tenderness sunk into my bones and the more it uplifted me not in a saccharine way, but in the messy but honest way that illuminates Christine’s own discovery. Lady Bird is a shrouded gift whose pleasures will be made known to those who seek and find it, making it a completely apropos movie to seek out this holiday season.